There's more than enough crap up there already 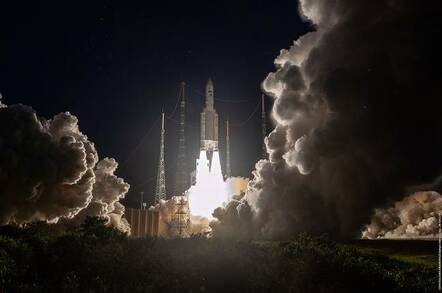 Roundup As ISS astronauts get cracking with the next AMS spacewalk, take a moment to look back at the week in rockets. Arianespace celebrated its 250th launch, Russia and India fired off some of their own, and Rocket Lab spared us all more space junk.

Rocket Lab's "frequent and reliable launch" claim took a bit of a knock as the company was forced to delay its "Running Out Of Fingers" mission due to wobbly ground equipment.

CEO Peter Beck pointed at a "stage 2 umbilical" as the culprit.

Stage 2 umbilical needs reset and tested. Simple to do but will require a pad recycle. Probably will push out a few days.

Sabotage by worried astronomers, perhaps? Of course not, but in light of Elon Musk spaffing Starlinks over the sky, stargazers could be forgiven for emitting a groan at the news that one of the payloads onboard Electron was from Astro Live Experiences (ALE) and would be attempting to create an artificial meteor shower.

The 75kg box has "400 sources of man-made shooting stars in 5 colors" according to the company – blue, white, green, pink and orange.

"It is ALE's wish to see that many people will be able to feel and enjoy the universe from the ground," the Tokyo-based outfit said. The company's first satellite, replete with a deorbiting mechanism, was launched back in January on JAXA's Epsilon 4 rocket.

Also on board are six 5cm PocketQube microsatellites from Alba Orbital.

The launch will also feature Rocket Lab's first crack at a guided re-entry of the Electron launcher. While recovery is not planned this time around, the booster features reaction control systems to keep things orientated as well as guidance and navigation hardware.

The company hopes to capture telemetry from the spent booster as it descends, although a spokesperson told The Register that though there are "cameras on board S1 to show re-entry (pending telemetry strength)", it will "take a couple of weeks for the team to fully analyze the data".

The launch window remains open until 12 December, so the company has a while yet to get its 10th mission off its New Zealand Launch Complex 1 facility.

There were smiles in French Guiana as Ariane flight VA250 conducted a successful launch to Geostationary transfer orbit on 26 November.

Carrying satellites for Egypt and Inmarsat, it was the 250th launch of an Ariane rocket since 1979. The first Ariane 5 ECA lift-off was back in 2002 and ended abruptly after an engine failure.

Things went better this time and, after a scrub on Friday due to a problem with ground systems and weather-induced delays, the booster left the pad at 18:23 local time.

The payloads required the long version of the Ariane payload fairing. The upper payload, TIBA-1, was a civil and government telecommunication satellite for Egypt. The lower payload, Inmarsat GX5, was a mobile communications satellite and is the fifth (and by far the most powerful) of the operator's Ka-band Global Xpress (GX) fleet.

The total payload carried by the launcher from Kourou's Ariane Launch Complex No. 3 (ELA-3) came to approximately 10,495kg.

It is very much a farewell tour for Ariane's veteran heavy-lifter. Once its successor, the imaginatively named Ariane 6, comes online at the beginning of the next decade, the 5 will be retired. A dozen or so launches still remain, however, including the forever-delayed James Webb Space Telescope in 2021 (maybe).

Two launches from India and Russia

Russia sent the latest variant of its venerable booster, in Soyuz-2.1v form, into space from the Plesetsk cosmodrome.

Occurring at 20:53 Moscow time on 25 November, it was the fifth Soyuz-2.1 launch from the site this year.

Russian officials remained tight-lipped on the payload, other than confirming the launch success and that the spacecraft was "designed in the interests of the Ministry of Defense of the Russian Federation" and would be able to snap pictures of the Earth's surface. A previous launch in July contained four classified military satellites.

Unlike the Soyuz of old the 2.1v variant lacks the four side boosters of other versions, but does feature an NK-33 engine originally intended for Russia's N-1 Moon rocket.

Carrying 13 commercial nanosatellites and a third-generation imaging satellite, Cartosat-3, the mission was the fifth launch of 2019 and the 49th flight of a PSLV. The rocket was in the "XL" configuration and featured a cluster of six solid strap-on boosters.

The 1,625kg Cartosat-3 was deposited into an orbit with a mean altitude of 500km and is expect to spend the next five years peering at the surface of the Earth. ®

Scrubtastic end to 2018 as SpaceX, Blue Origin, Arianespace all opt for another day on Earth

*If nothing else goes wrong

One goes up, one stays on the ground and one gets ready: It's a week in space

Roundup A trio of heavy lifters in rocket boffinry