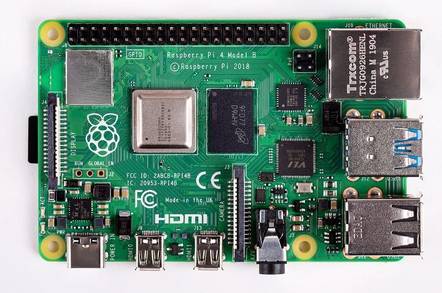 Users of the Raspberry Pi 4 mini computer are puzzling over an issue where setting some display resolutions have the side-effect of killing the Wi-Fi connection.

The problem was noticed by developer Enrico Zini, who is working on a digital signage box using the Raspberry Pi 4. "One full day of crazy debugging, and the result is that if the Raspberry Pi 4 outputs HDMI at a resolution of 2560x1440, the Wi-Fi stops working," he reported.

It turns out that Zini is not alone - as far back as August this year, a user reported: "With 1920x1080, wlan0 became disconnected after it was OK at lower screen resolutions. Was in 2.4GHz band."

The Pi's micro-HDMI ports can be a nuisance, causing some owners to use an adapter. A Pi engineer pointed out that adapters are not recommended, saying: "You should use a uHDMI to HDMI cable for best results."

It also appears that 5GHz Wi-Fi networks are preferable. Even when it works, though, there are reports that "Wi-Fi performance is significantly degraded with monitor connected to HDMI0. There is less degradation when the monitor is connected to HDMI1. Interference between HDMI and Wi-Fi seems like a plausible scenario." This user's recommendation is to use the HDMI1 port, the lowest resolution possible, do not use Wi-Fi, or "wait for the next hardware iteration that will hopefully fix the issue."

The Pi is a terrific piece of kit with or without some puzzling interactions between the Wi-Fi and the display, though users will be hoping for a fix or definitive advice (we have asked the Pi Foundation for more information and will report back if received).

The biggest problem here, perhaps, is that if they cannot connect to Wi-Fi, most users will not immediately think of changing their display resolution or HDMI cable as a solution. ®