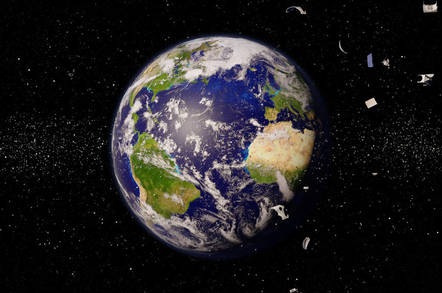 Skywatchers in Spain recording meteors being transformed into brilliant streaks of light by atmospheric compression are a bit miffed – as their view was rudely interrupted by a slew of Elon Musk’s Starlink satellites.

Below is a short clip of what it looked like above La Palma, one of Spain’s Canary Islands last week. The meteor shower known as Alpha Monocerotids crisscrossed the sky, though it becomes hard to spot them once the satellites come flooding in.

SpaceX's table-sized Starlink birds, which sport reflective solar panels, are closer and brighter as they zip across the camera’s line of sight like machine gun bullets.

Starlink satellites during a meteor shower on Nov. 22. pic.twitter.com/wJVk1qu49E

Denis Vida, a geophysics PhD student at the University of Western Ontario, Canada, who wrote the code to generate the footage above captured from one of the Global Meteor Network’s cameras, said the obstruction happens every day.

“Note that this was not a one time occurrence,” he told The Register. “We see this every day before dawn with about half the cameras in our network. During that time we effectively lose about half our field of view because of this.

Musk and his SpaceX team sent 60 Starlink units into orbit to beam down broadband connectivity in May this year. A month later, the International Astronomical Union, issued a statement warning that the dazzling satellites could hamper research and disturb wildlife.

“[We’re] concerned about these satellite constellations,” the union previously said. “The organisation, in general, embraces the principle of a dark and radio-quiet sky as not only essential to advancing our understanding of the universe of which we are a part, but also as a resource for all humanity and for the protection of nocturnal wildlife. “We do not yet understand the impact of thousands of these visible satellites scattered across the night sky and despite their good intentions, these satellite constellations may threaten both.”

Musk has set a goal of eventually sending 12,000 of them into space. This could have serious consequences, Vida warned, since they are interfering with spotting the most dangerous kinds of space debris.

“If [he] really launches 12,000 satellites, I see no way to work around this,” Vida told us. “We'll just pack up early and miss crucial observations before dawn. For example, observations during twilight are very important for the asteroid community, as potentially hazardous asteroids are best seen during this time.”

“These satellites will most definitely interfere with important astronomical observations which can have implications on predicting future meteor shower outburst. Accurate meteor shower predictions are essential for understanding the hazard they pose to spacecraft – do you see the irony? – and astronauts in orbit.

Prettier than normal with a little help from friendly gas giant

US skywatchers get Earth's first peek at new meteor shower

Perseid meteors in high-def sky-streak, unless cloud blocks 'em out

What a shower: METEORS will BLAZE a FIERY TRAIL across our skies

One for The Bumper Book of Astronomical FLOPS, then