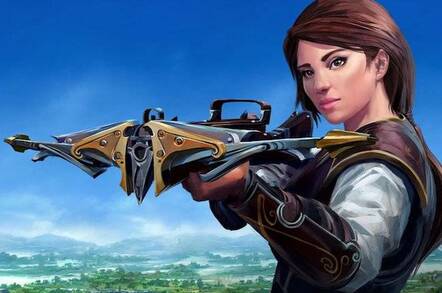 A RuneScape artist who found a document on an office printer that stated a senior veep's salary and mentioned it to colleagues was wrongly fired by red-faced managers, the Employment Appeal Tribunal has ruled.

John McCambridge, a lead concept artist on the long-running massively multiplayer online roleplaying game (MMORPG), was sacked from Cambridge-based Jagex Ltd in August 2017 after "finding a document that had been left on the communal printer which contained the salary of a senior employee and telling a few colleagues about it".

Amid what the tribunal described as a "catalogue of procedural failings", McCambridge was sacked for gross misconduct – even though his colleagues who also saw the document and discussed it with co-workers got away with no sanction or verbal warnings.

Jagex lost its attempt to appeal against McCambridge's total victory over it in the employment tribunal. The firm, which runs the MMORPG, was found to have sacked McCambridge unfairly in what Her Honour Judge (HHJ) Mary Stacey described as a "substantively flawed decision" brought about by Jagex managers "wrongly" trying to "make an example… to cover their own discomfiture".

HHJ Stacey ordered that the original Employment Tribunal which heard McCambridge's case reconvene to decide whether or not he had contributed to his own sacking – and to decide what remedies (damages) to award him.

'Guess the Pay of the Executive'

At the time, within Jagex there was "disquiet about the pay levels for developers", meaning that when careless senior veep Hamza Mudassir left a copy of his mother-in-law's visa application on an office printer, complete with his own salary details on it, news spread quickly. McCambridge first saw it at 7am, later pointing it out to a passing colleague – the "only person" he told that day about it, as the tribunal judges found.

By lunchtime that day a group of nine employees at an off-site work event in a restaurant were playing what the Tribunal called a bidding game – Guess the Pay of the Executive you might call it – where people would shout out a guess and be told if the salary was higher or lower than the guess, until someone gave an accurate bid.

McCambridge was not at the lunch. He was "in the office completely unaware of what was happening at the off-site work event". Angry staff confronted managers about Mudassir's evidently excessive pay packet. Meanwhile, an oblivious McCambridge came to work the following morning, saw the offending visa application still on display next to the communal printer – and "put it in a confidential waste bin".

Nonetheless, management wanted blood. McCambridge was summoned to a meeting later that day with lead designer David Osborne, who had had his chest poked by the organiser of the off-site lunch as to the level of Mudassir's salary. McCambridge, the tribunal ruled, did not accept that the visa application document left on the printer for anyone to read was confidential. He was also "open about the three people he had mentioned it to".

McCambridge was then summoned to a separate disciplinary hearing – again, heard by David Osborne – and was duly sacked the following day for gross misconduct. Jagex accused McCambridge of not showing "remorse for your actions or consideration for the injured party, instead suggesting the blame is that of the party for leaving the information on the printer".

Jagex's attempts to argue that McCambridge breached his contract of employment by failing to treat the visa application and salary details as confidential information completely failed after McCambridge represented himself at the first-instance employment tribunal hearing, which ruled in his favour.

In fact, as HHJ Stacey pointed out in her judgment dismissing Jagex's appeal, Mudassir – the careless veep – could have been argued to have committed a technical breach of his own contract of employment by failing to mark the document "in accordance with the [Jagex] information security system", thereby vindicating McCambridge even further.

Nonetheless, the company's document marking system was clearly designed to protect trade secrets, as HHJ Stacey put it, and not embarrassing information left carelessly lying around in the offices of a company that employed 320 people.

The full judgment, a rather readable document as employment appeal judgments go, can be read on gov.uk. ®

This ain't over, Viasat snarls as tribunal rules in satellite rival's favour