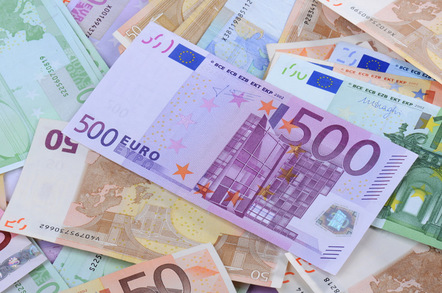 ESA bigwigs were cock-a-hoop today as the agency's Ministerial Council passed a bonzer budget, with the UK, Germany, Italy and France splashing the most cash.

The 10 per cent rise was, according to ESA, the first significant boost in funding in 25 years.

Total subscriptions (PDF) from the states stood at €14.4bn, with Germany spanking €3.3bn, France €2.7bn, Italy €2.3bn and the UK €1.7bn, making the UK's contribution to the European space shenanigans an impressive 11.5 per cent of the total budget, but only a hair over half of what the Germans pump in.

Unlike NASA, which operates on a year-to-year basis (albeit with a much bigger budget), ESA's budget gives the agency five years, which makes planning a tad easier.

An exhausted-sounding representative of the UK Space Agency (there are 22 governments to corral in order to get agreement after all) confirmed to The Register that the UK would not be spanking those Euros all in one go. Instead, the amount would be spread out among the projects being undertaken by ESA (including those previously agreed that the UK has yet to pay for), hitting around £374m per year.

That cash will ensure the UK keeps its fingers in various pies, including the Lunar Gateway, retrieving samples from Mars, satellite broadband and dealing with space junk. And, of course, getting Tim Peake back to the International Space Station (ISS) before 2024, when NASA is scheduled to start pulling US support from the outpost. ESA had already promised that all astronauts from the 2009 class would get a second flight, and today's announcement is a reconfirmation of that.

ESA also stated that it intends to continue supporting the ISS until 2030 as well as contributing transportation and habitation modules to the Lunar Gateway.

The budget also gives the green light to ESA's reusable spacecraft, the Space Rider, as well as ensuring a "smooth transition" to the new roster of launchers: Ariane 6 and Vega-C.

Some within ESA had expressed a little disquiet about the latter in conversation with El Reg recently, wishing that perhaps the agency could have been a little braver and pushed ahead with more exotic tech while leaving traditional rocketry with the commercial launch providers.

Slightly worryingly for Blighty, the agency trumpeted: "The coming years will also see ESA reinforce its relationship with the European Union."

Britain, infamously, could well be doing quite the opposite come 2020. ®

Space extenders MEX I can: A tale of ingenuity and innovation