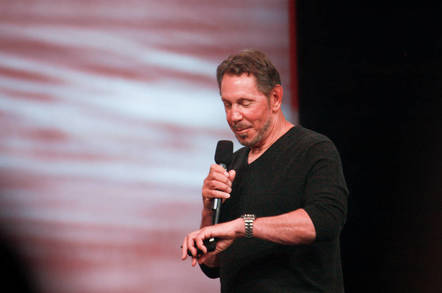 Oracle has finally addressed long standing accusations that it discriminates against and underpays women and minorities by... suing the government department that has repeatedly flagged the issue, claiming it has no authority over Larry and his boys.

In a lawsuit [PDF] filed Wednesday in a Washington DC district court, Big Red accuses the US Department of Labor of “unprecedented overreach by an executive agency,” and claims the agency doesn’t have the authority to cut Oracle out of government contracts for its discriminatory practices or sue it for underpaying certain staff.

With one hand holding the constitution and the other bashing its chest, the database giant warned perilously that “the rise of the modern administrative state has altered our government structure” but that it had “not undone our constitutional structure.”

The folks at the Office of Federal Contract Compliance Programs (OFCCP) have “created a coercive administrative enforcement and adjudicative regime” the lawsuit bellows. “Without authority from any Act of Congress - indeed, in contravention of congressional legislation - a group of unelected, unaccountable, and unconfirmed administrative officials have cut from whole cloth this adjudicative agency enforcement scheme.”

It’s safe to say Oracle is not a fan.

The lawsuit is just the latest in a brutal battle between Oracle and the Labor Department that started in 2017 when the government sued the database biz for pay and employment discrimination. According to federal investigators, Oracle pays its white male employees more than women and minorities even when they are in the same job with the same title.

It studied Oracle’s hiring practices since 2013 and concluded that there were “gross disparities in pay even after controlling for job title, full-time status, exempt status, global career level, job speciality, estimated prior work experience, and company tenure.”

How does No sound?

It also noted that Oracle had refused to cooperate or hand over records. And since it has violated federal laws, the department threatened to freeze it out of government contracts unless it fixed the situation.

Oracle responded pretty much as anyone who had dealt with Big Red would expect: a heady mix of stubbornness and aggression.

That resulted in a second lawsuit from the Labor Department earlier this year in which it accused Oracle of “stark patterns of discrimination” against women and minorities to the tune of $400m. That lawsuit also included the eye-popping claim that Oracle had put in place an entire system to bring men from India over to the US on work visas and pay them less while rejecting qualified people from everywhere else.

According to its investigation, the Labor Department said that between January 2013 and December 2016, 90 per cent of technical graduate hires were Asian. For several years, Oracle hired no Black or Hispanic grads at all, and more than 100 "qualified, non-Asian" suitable applicants were turned away by the database giant.

It wasn’t just the US government suing Oracle on this either.

In October 2017, a group of former women staffers filed a lawsuit claiming that they had been deliberately and unfairly paid less than their male colleagues.

"At all relevant times, Oracle has known or should have known of this pay disparity between its female and male employees, yet Oracle has taken no action to equalize men and women’s pay for substantially equal or similar work," the lawsuit claimed.

Those claims were then backed up by an analysis of the company’s payroll that concluded Oracle was paying women, on average, $13,000 less than their male counterparts. Women were also getting 13 per cent less in bonuses and 33 per cent less in stock options.

One in a billion

The expert brought in to do the analysis, Professor David Neumark of UC Irvine, said the probability of the discrepancy happening by chance was less than one in a billion.

There’s more: in May this year, Oracle was sued again by another group of people - this time old folks. A former Oracle salesperson claimed the company had discriminated against him because of his age and a medical disability and argued there was a deliberate corporate strategy to replace older workers with younger ones.

Oracle responded with its customary tact and respect. Talking about the second DoL lawsuit (as opposed to the other three), its general counsel Dorian Daley said: "This meritless lawsuit is based on false allegations and a seriously flawed process within the OFCCP that relies on cherry picked statistics rather than reality. We fiercely disagree with the spurious claims and will continue in the process to prove them false."

Unfortunately for Oracle there appears to be a wealth of evidence against the company, but rather than do what others have done and, you know, change its systems to pay everyone equally, it has decided to spend that money on lawyers claiming that the US Department of Labor has no right to enforce labor laws in the way it’s doing.