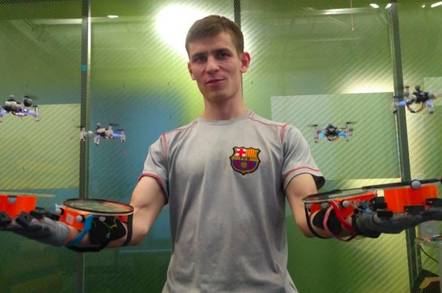 Have you ever wanted to land a drone on your arm as if the gizmo were some sort of metallic bird of prey? Well, if so, you’re in luck. Sort of.

Enter the SwarmCloak... which may as well be called the SwarmDinnerPlate. Or the SwarmGardenGlassTopTable. It's a glass landing pad that can be worn on the arm or hands. Inside are a bunch of vibration motors that stimulate the drone pilot's flesh to indicate the drone's proximity. In case, you know, your eyes and ears aren't working properly.

The wacky gadget was created by a team of engineers from Skolkovo Institute of Science and Technology (Skoltech) in Russia, and the University of Electro-Communications in Japan.

“The proposed technology could have a strong impact on the human-swarm interaction, providing a new level of intuitiveness and engagement into the swarm deployment just right from the skin surface,” they wrote in a paper emitted via arXiv this month.

The design, allegedly, makes it easier to direct tiny drones on your arm. Smaller quadcopters are jittery, making them difficult to land safely on the ground so people often just try to catch them mid-air. Now, you can land them on your arm to look like some sort of futuristic falconer whispering magic words to machines.

In this case, the Crazyflie 2.0 mini quadcopters, which sport red LEDs in their base. As they fly over the sensor units, the landing pad's light sensors pick up the LEDs, and the closer the mini-drones get to the landing pad, the more intense the vibrations from the SwarmCloak.

“The location of the tactile stimulus reveals the position of the drone in the horizontal plane and stimulus intensity shows the distance to the robot in a vertical direction,” the team explained. The drones are tracked using open-source software derived from the Robot Operating System Kinetic framework.

SwarmCloak could be used in virtual reality (VR) experiences. The researchers envisioned scenarios where the tactile interactions could mimic bird landings or even model the touch of things like jellyfish or, hell, even wood sprites, apparently.

"For mass production price per one unit (one landing pad) could be something like $50. But for small batch production, it is around $100-200 or even more," Evgeny Tsykunov, co-author of the paper and a researcher at Skoltech, told The Register.

Their imaginations didn’t stop there, either: they also thought that the quirky contraption could also be tweaked to allow people to communicate in VR or feel like they were flying.

“A unique telecommunication system can be developed based on SwarmCloak technology. The partners can communicate through the distance by their avatars represented in VR and augmented by the swarm of drones,” they concluded.

"In this case, the swarm, which is capable of tactile interaction with a user in VR, might represent the skeleton structure of the human body flying in the air. This may bring a new level of immersion of VR communication and teleconferencing." ®