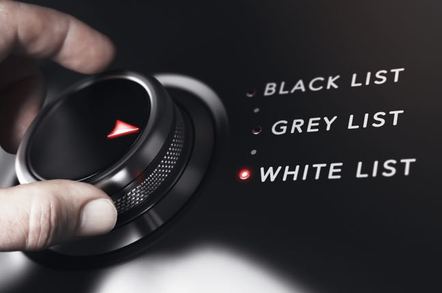 UK hosting outfit tsoHost (the artist formerly known as TSO Host) continues to suffer the blacklist blues as email woes have continued to beset the company.

"Unbelievably, it's even worse!" remarked one Register reader as Microsoft blacklisted some of the company's addresses, making it somewhat tricky for affected customers to send emails to accounts hosted by the Windows giant. You know, minor stuff like Office 365, that sort of thing.

Things had tottered back after the incident in August, when customers were unable to send emails to Hotmail or Outlook addresses for more than a week.

This week's borkage looks to have started a week ago, with the company once more pointing the finger at Microsoft for blocking its IP addresses. The catalogue of naughtiness began with IP 95.142.156.174 due to its "reputation" on 18 November, before the Redmond gang moved on to webmail at 95.142.156.251. Gemini.servers.prgn.misp.co.uk and Nebula.servers.prgn.misp.co.uk were blacklisted yesterday.

The company's cloud hosting mail IP, 188.65.116.98, which is responsible for emails sending via contact forms, has been blacklisted for over two weeks now: "Our client [sic] may face bouncebacks when emails are send [sic] from their contact forms to Microsoft accounts. Please excuse us for the caused inconvenience."

It's not a great situation but, hey, there's always comfort from tsoHost's ("we know hosting back to front" – geddit?) social media orifice with quizzes on typefaces and advice on good sleep hygiene.

You know, in case you're losing sleep over your hosting.

One of the company's emissions prompted the obvious question:

Confused... What's this got to do with hosting?

Naturally, The Register attempted to contact TSO Host to get its take on the problems, but despite spending some quality time on hold, we've yet to receive a response. ®