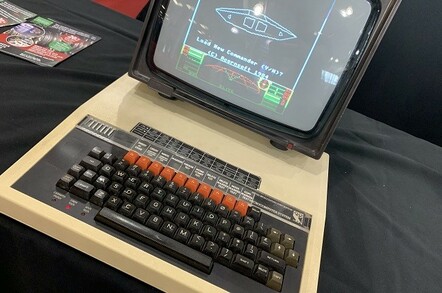 Who, Me? Monday has arrived once more, and with it a Model B Who, Me? as Acorn's finest takes centre stage.

Our tale comes from "Drew" and is a blast from the UK of the 1980s, replete with Margaret Thatcher, Youth Training Schemes (YTS) and Acorn's (then) finest: the BBC Micro Model B.

Young Drew was a tad sniffy when it came to the YTS of yore, noting that the placement could amount to what he regarded as slave labour for a 12-month stint. "During my time," he told The Register, "the going rate was £25 per week."

However, Drew had noted the arrival of Information Technology Centres ("or ITeC as they became known"), and managed to weasel his way into such an establishment.

If you didn't fancy mowing lawns or staffing the tills, ITeCs were a great option. They were, Drew told us, "split into three disciplines: Modern Office, Electronics, Computer Programming."

Everyone got a month to play in each discipline before, as Drew put it, "electing on our chosen path to righteousness."

Drew found himself sat at one of a network of 12 BBC Micro Model B machines, hooked up to an Apple machine acting as a server. No expense spared in those halcyon days although, to be fair, trying to network the vastly cheaper Sinclair computers of the era could charitably be called a challenge.

Blown away by the delights of saving to 5 ¼ inch floppy disks (sometimes to both sides) Drew was understandably a little let down by how his application appeared on the screen.

Until, he RTFM and discovered the world of ASCII control codes.

Such joy! He could make his app look just like Ceefax and Oracle as well as adding effects and imagery that would make the Digitiser team of old envious.

However, Drew discovered a darker side to those ASCII control codes.

"I also found out you could send messages to other linked Micros using the ASCII code and make jazzy messages appear on fellow students' screens."

Drew's victims found themselves with witticisms such as "Someone's watching you!" appearing in lurid post-punk green or pink appearing on their screens. Most simply sighed and carried on working.

Until the fateful day Drew discovered "an ASCII code that disabled output to the terminal."

"Now this was not good. Well it was, but a little cruel."

Indeed. Imagine typing in the greatest listing of all time and, as you're preparing to run it, the cursor stops responding.

If you'd saved frequently, a swift break and old would do the trick. Otherwise, ouch.

Drew still has sleepless nights about "one specific lab rat that really took it to heart and the code he had lost", and subsequently cut back on the use of the evil command.

More than 30 years on, and Drew is a plucky BOFH, heading up an IT support team. But that precursor of Net Send still haunts him... mainly because he didn't patent the idea.

Ever been the victim of a witty network message mid-workshop? Or maybe you sent a few yourself? Can you forgive Drew for his decades-old misdeeds? Send an email to the sympathetic Vultures of Who, Me? for swift and merciful judgement.