Also: Teams and Slack get the handbags out 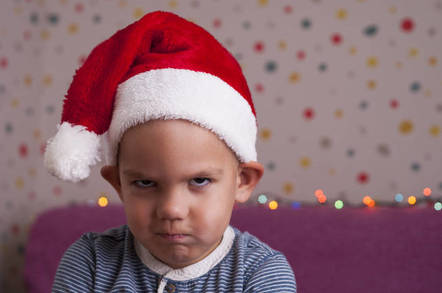 Roundup Though there won't be any Surface Earbuds in stockings this year, a Release Candidate of PowerShell 7 is looking likely and maybe, just maybe, we'll get a nearly finished Windows 10 20H1.

Mere weeks after Windows 19 19H2, aka The Windows 10 November 2019 Update, aka 1909 began slithering into the hands of end users, it looks like next year's Windows 10 could be done and dusted.

Brandon LeBlanc, senior program manager for Windows Insider, ushered build 19030 into the Fast Ring (where the scariest code is publicly dropped on eager testers) and noted that the build watermark usually found in the lower right-hand corner of the desktop was no longer present.

Testers have taken this as a sign in the past that things were nearasdammit complete, yet LeBlanc was at pains to emphasise: "This doesn't mean we're done..."

So yeah, they're probably just about done.

Windows fans awaiting some sort of big-bang feature, having watched 20H1 totter along throughout the year, are therefore likely to be disappointed. Sure, compared to the steady-as-she-goes of 19H2 there are toys aplenty, but nothing quite as keynote friendly as Timeline or Sets.

This is no bad thing, particularly with what is coming down the pipe later in 2020.

The Windows Subsystem for Linux (WSL) 2, replete with Linux kernel, is the clearest nod to developers in 20H1 and a boon to those that need it, and the ability to nuke a PC from orbit by installing directly from the cloud (rather than faff about with USB sticks) is undoubtedly handy.

The unloved Cortana assistant received a new, chat-based UI (and lost a number of its existing skills in the process). Indeed, with 19030, Cortana continued "evolving" into a "personal productivity assistant that helps you in the Microsoft 365 apps".

With both the issues and fix lists shrinking (although that pesky USB 3.0 problem remains), and the frequency with which "stable" builds of 20H1 are hitting the Slow Ring increasing (build 19025 arrived for cautious testers last week, a few short days after turning up in Fast), there is every possibility that Santa's sack might be bulging with a RTM version of Windows 10.

PowerShell 7 – heading to RC for Christmas

Microsoft will not be covering one of popster Chris Rea's better-known hits, but is most definitely driving to RC for Christmas with the final preview release of the open-source command line shell.

Despite the proximity to release, the gang has continued to close the gaps between upstart and venerable original.

While PowerShell 7 is intended to be cross-platform (there are macOS and Linux versions), Windows-specific Cmdlets, such as Get-Counter, Out-Printer and improved compatibility to allow the importing of non-Core friendly Windows PowerShell modules have been added.

That compatibility does, however, require Windows PowerShell 5.1 to be lurking about.

For cross-platform fans, however, Get-Clipboard and Set-Clipboard (for text only) have also put in an appearance.

The Release Candidate is due to hit in December, with General Availability hitting in January.

Hoping for a pair of giant, will.i.am-baiting Surface Earbuds for Christmas? Tough. Even as the first Surface Pro X devices dropped into the hands of users last week, Surface supremo Panos Panay had some bad news for the faithful.

The hulking lobe discs, a snip at a mere $249 for Office 365 integration and "all day battery" (as long as you don't need more than eight hours of continuous listening), were due to arrive before the end of the year, but have now shuffled to a "worldwide" Spring 2020 launch.

Apple's AirPods Pro, also priced at $249 and also featuring some neat noise-cancelling tech, are available now and while users might have to do without that Office 365 integration, there is always the "magical" Siri experience.

Panay did not give details behind the delay, although it seems likely that it has proven tougher to make the things than expected.

In the meantime, Microsoft would be more than happy to sell you a $349 pair of Surface Headphones if those dollars are burning a hole in your pocket.

Finally, Microsoft and Slack enjoyed a good bit of gauntlet slapping last week as the Windows giant trumpeted more than 20 million "active users", quite a jump from the 12 million claimed by the hipster chat outfit.

Of course, the definition of "active users" is a little open to question, and Slack has argued in the past that its platform deals with over five billion actions by its customers every week. For its part, Microsoft laid claim to over 200 million open, edit, or download actions on files stored in Teams in the last month.

Slack's stock price took a pummelling with the publication of Microsoft's boasting, plummeting from a high of 23.50 on 18 November to a low of 20.66 on 19 November. The stock then hovered around the 21 mark for the rest of the week.

And this in spite of the hipster platform's social media orifice deciding to highlight similarities in the Teams promotional materials to its own.

With the now compulsory "OK boomer" barb, of course.

A pedant would likely point out that Microsoft is technically a member of Generation X, but we guess the suggestion is that the Windows giant is old and out of touch compared to the achingly on-trend Slack.

We'd also have to advise a little caution in studying the comparison because, while both videos feature rolling spheres, a viewer should be wary of a company cherry-picking those sections that fit its argument the best.

Something that seems to be becoming a bit of a theme as the collaboration platforms face off over statistics.

Either way, we're quite sure that Slack doesn't have the monopoly on shoving a load of old balls into its commercials. ®