'It didn't go through, that's the plus side' 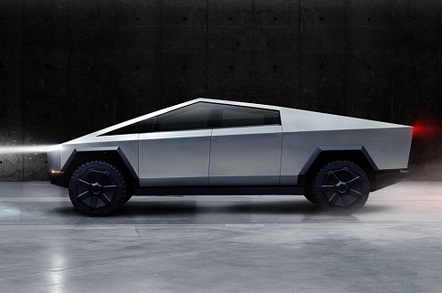 So we know Elon Musk believes we're "probably" living in a simulation. He might well be right because the big reveal at the LA Tesla Design Center last night refused to render properly.

The event launched the $39,900 electric "Cybertruck", Tesla's tilt at the pickup market, which has been whispered of since 2013.

CEO Musk has made a number of extraordinary claims about the model, tipped for release in 2021-22. He told unofficial Tesla podcast Ride the Lightning in June that the goal is to be "a better a truck" than a Ford F-150 – America's best-seller – and "a better sports car" than a Porsche 911.

He also made much of the inspiration behind the design. "It's gonna be like a really futuristic-like cyberpunk, 'Blade Runner' pickup truck," he breathlessly told Vox last year. "It's gonna be awesome, it's gonna be amazing. This will be heart-stopping. It stops my heart. It's like, oh, it's great."

Nobody *expects* the Cybertruck pic.twitter.com/khhYNFaVKs

But now, rolling onto the stage like a glitch in the Matrix, the faithful have witnessed the Cybertruck in all its polygonal glory – and, sure, the Blade Runner angle is present and correct. But that it also looked like something we drove on the original PlayStation in our youth was not lost on the web commentariat.

But the launch went a bit Pete Tong* when His Muskiness started touting the vehicle's toughness. "So we're able to make the skin out of thick ultra-hard stainless steel – it's really hard," he said, glancing nervously back towards the metal monstrosity before inviting Tesla chief designer Franz von Holzhausen on stage to derobe from his Matrix jacket, the definitive "look" of the night, and have at it with a sledgehammer.

After denting a "regular truck door", Von Holzhausen turned his attention to the Cybertruck, which deflected the blows with aplomb. So far, so good. Musk then spoke of the truck being "literally bulletproof" while the background projection showed a 9mm bullet shattering on impact, supposedly hitting the Cybertruck door.

"But what about the glass?" Musk pondered. "Seems like a vulnerability," he quipped as the projection bragged of its "transparent metal" properties. The team effortlessly cracked "normal car glass" with a heavy metal ball dropped from height. But the "Tesla armor glass" successfully brushed off similar such attacks from larger balls at greater heights.

Franz was invited back up and asked to try to break the windows on the car proper. "Sure?" he smiled, playfully weighing one of the metal balls in his hand. "Yeah," Musk shot back.

"Oh my fucking God," said Musk. "Well, maybe that was a little too hard." The window shattered, though remained intact. "It didn't go through, that's the plus side." Same with the rear.

You can watch the farce unfold in its entirety here.

Tesla has had a comparatively good year, shocking everyone by actually returning a profit in the third quarter. Meanwhile, sales of pickup trucks of the gas-guzzling variety went up in Q3 in the US, though electric vehicles were down 18 per cent on the year before. Can Musk meet them in the middle? At $39,900 for a motor that looks like it belongs in an N64 racing game, we're not sure but are happy to be proved wrong.

Musing on how many Tesla might be able to sell, Sacconaghi said: "Given its design, the Cybertruck probably isn't going to be addressing this entire 2.5 million to 3 million market. Even prior to the unveiling last night, we note Elon Musk had been uncharacteristically reticent in sizing potential Cybertruck demand. The most precise estimate Musk has given to date was a comment on the Q2 19 earnings call that Cybertruck demand might ultimately be below demand for the S-X (so 80-100k/year). This sounds about right to us.

"In fact, the closest comp we can think of for the Cybertruck might be the Hummer brand in the early 2000s – while obviously an ironic contrast in terms of environmental impact, the original Hummer was arguably similar to the modern Cybertruck in terms of its price point, contrarian design, 'built tough' ethos, and general niche appeal among Americans. Hummer sales hovered around 30-50k per annum in the early 2000s and 60-80k in the mid-2000s."

On the other hand, why not save yourself a small fortune with this dashing 1:18 scale replica of the Armored Personal Carrier from Aliens. It looks the same but for $299. You can't go space trucking in it, though, sadly.

The "pressurised version" of the Cybertruck is also supposedly the "official truck of Mars". So let's hope they sort those windows out. ®

* British DJ Pete Tong = rhyming slang for "it's all gone a bit wrong."