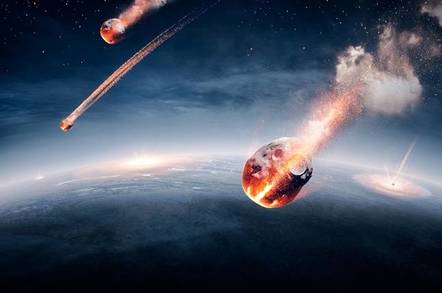 Scientists have detected alien sugars in Earth-bound meteorites for the first time, providing further evidence that some of the ingredients needed to kick start life on our planet may have been delivered from elsewhere in space.

The boffins – led by a team at Tohoku University, Japan – analysed powdered samples of two meteorites dubbed NWA 801 and Murchison. They found several different types of sugars, including ribose – a vital component for RNA – in varying abundances that ranged from 2.3 to 180 parts per billion.

Previous meteorite specimens have contained water, amino acids, and other compounds that form the backbone of DNA and RNA, leading researchers to speculate that the chemical origin of life may have been brought to Earth during ancient meteorite bombardment events.

“The research provides the first direct evidence of ribose in space and the delivery of the sugar to Earth. The extraterrestrial sugar might have contributed to the formation of RNA on the prebiotic Earth which possibly led to the origin of life.”

Although it’s possible that the sugars in the meteorites may have been contaminated by terrestrial life, the researchers believe it’s unlikely. Some of the compounds contain rare samples of carbon-13, a heavier isotope of carbon-12, suggesting that the sugars are extraterrestrial in nature.

The evidence also supports the hypothesis that RNA was initially more important than DNA for the development of life. “The sugar in DNA was not detected in any of the meteorites analyzed in this study,” said Danny Glavin, co-author of the study at a researchers at NASA Goddard.

“This is important since there could have been a delivery bias of extraterrestrial ribose to the early Earth which is consistent with the hypothesis that RNA evolved first.”

How life began from non-biological processes, however, remains a mystery. Some researchers believe RNA evolved first because it also carries genetic information and can self-replicate without the need to produce proteins in the first place, unlike DNA.

“It is remarkable that a molecule as fragile as ribose could be detected in such ancient material,” said Jason Dworkin, a co-author of the study and a researcher at NASA’s Goddard Space Flight Center.

“These results will help guide our analyses of pristine samples from primitive asteroids Ryugu and Bennu, to be returned by the Japan Aerospace Exploration Agency’s Hayabusa2 and NASA’s OSIRIS-REx spacecraft.” ®