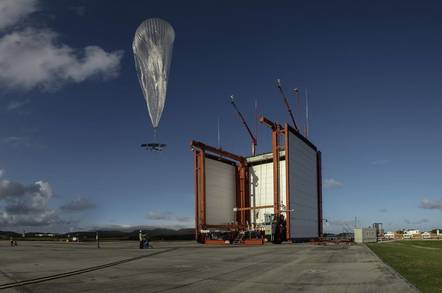 Loon, an Alphabet-owned subsidiary, is collaborating with an internet service provider in Peru to set up wireless broadband internet over the Amazon rainforest using the Chocolate Factory's balloon fleet.

If everything goes to plan, people living in the remote jungles will hopefully have internet access next year using the system. Loon announced it had signed a deal with Internet Para Todos Perú (IpT), a rural mobile infrastructure operator owned by multiple companies, including Telefónica and Facebook, to set up the service.

Instead of traditional cellular towers, Loon employs a network of giant billowing translucent balloons that hover 20 kilometers above sea level. Each balloon is made out of a large sheet of polyethylene that covers an area the size of a tennis court. At the bottom of the balloon sits a series of antennas, solar panels, and a battery.

The antennas transmit broadband from a ground station across the balloon mesh network and beams the signals back down to a user’s mobile phone at LTE speeds. They maintain their position by rising and falling to catch different wind direction, a technique Loon has been perfecting for years.

The balloons aren’t permanent structures, however, and are built to last about 100 days or so after which they deflate and the hardware floats back down to the ground using a parachute.

Loon and IpT will focus on setting up the balloon network over the Loreto Region in the Peruvian Amazonian forest, an area where 200,000 locals live. A quarter of the population there doesn’t have access to 3G service or even a reliable mobile network service.

Before the service can be rolled out more permanently for non-emergency services, Loon, IpT, and Telefónica will have to obtain the green light from Peru’s Ministry of Transport and Communications for approval first.

“Internet para Todos was born with the purpose of connecting millions of Latin Americans, including 6 million Peruvians without adequate access to mobile internet,” Teresa Gomes, CEO of IpT, said in a statement.

“This challenge involves reaching difficult access areas with innovative and sustainable technologies that allow us to overcome geographical, technological and economic complexities. Thanks to this agreement with Loon, we will extend the mobile internet access to more Peruvians with disruptive technology.” ®