I dream of wires 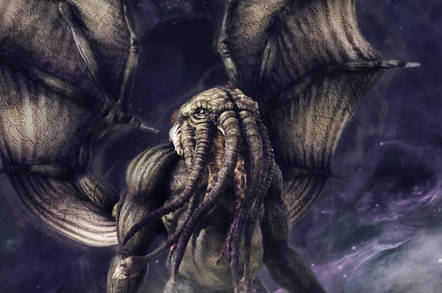 Hang on. I'm sure I wired the Nintendo to the teakettle before I put the speakers in... Pass the pliers, s'il vous plait

Something for the Weekend, Sir? Guess what I'm doing with my hands right now.

Typing on the keyboard, obviously. I can't help it if "right now" for you represents a different point in the relative time-space continuum. Who knows what I will be doing with my hands once you get around to reading this? For me, right now, I'm still typing it.

Talking of timeslip, there is a wormhole in every shared office kitchen. I've experienced it at each of my clients' premises so I guess it may be true everywhere.

When I arrive early in the morning, non-specific-gender-fascist swot that I am, I stride past the kitchen or kitchenette, admiring how spotless and twinkly it is from the deft attentions of the overnight cleaning contractors. Not for long.

It only takes a few seconds to pick my hot-desk location for the day since it's always the same one, i.e. the only hot-desk not already baggsied by someone else the night before by leaving a spare jacket/cardigan/set of false teeth hanging on the back of the chair, i.e. the shitty desk next to the fire exit door that doesn't quite shut properly and lets the weather in.

Pausing only a moment to brush away the mini snowdrift that has accumulated next to the power block, I put down my backpack and head straight back to the kitchen to brew up some chai.

When I get there, barely a minute after I passed it earlier, the kitchen has transformed into a disaster zone. Spilt milk, coffee and various puddles of water cover every level surface. Brown liquid of different shades are splattered artistically across the walls. The floor is carpeted with a layer of granulated sugar and broken mug handles which crunch unpleasantly underfoot.

Torn cardboard boxes and heaps of scrunched sheets of kitchen towel are arranged around the edge of the vast but glaringly empty dustbin. A cupboard door is swinging open on its only remaining hinge. The cutlery drawer has been pulled out and is now face-down in the sink. The kettle is on its side. The microwave is on fire. Where the dishwasher used to be is now a smouldering hole in the floor.

No worries, the cleaners will be back overnight to put it all shipshape again, wipe down the surfaces and shovel away any charred body parts.

As I have mused in this column on previous occasions, it makes one wonder what people's houses must be like if their workplace kitchen etiquette extends to the personal domicile as well. This isn't meant as a "bah dropping standards etc" whinge but a genuine interest in what the otherwise sane and talented individuals I meet in offices get up to in the privacy of their own homes.

For a start, I'm pretty certain an awful lot of IT support dudes have installed voice-activated Smart Shit even though they of all people ought to know better. Even before the proliferation of consumer-targeted tat arrived on the scene, contract colleagues would boast about how they bought an old X-box on eBay for a tenner and reconfigured as a NAS to stream MP3s to speakers in different rooms. Admit it, you all love doing crap like that. It's more fun than tiling.

I even heard that there is a fad among middle-aged musos for recreating well-known tunes using the 8bit audio chip in old Nintendo SNES consoles. This can't possibly be true, can it?

Me, I've just moved into a house whose previous occupant was evidently a home cinema and hi-fi nut. I deduced this by the bundles of plastic-shielded copper spaghetti spewing out from skirting boards throughout the house. There is an especially vast and complicated explosion of Cthulhu-like tentacles emerging into the living room – snagging passers-by and entertaining the cat – plus a kind of multi-coloured entwined spaghetti junction horror next to (but otherwise apparently having nothing to do with) the electricity cabinet.

There are no plugs or ports, just sheath-clipped raw cable ends that must have been shoved or screwed into overpriced tat he picked up from Richer Sounds. Or even Maplin's, I suppose. And not a single cable is labelled to tell me what it's for.

The amazing thing is that all these cables are embedded deep into the walls. Not just in the plaster but behind the bricks, along with the usual lost spirit levels, witch dolls, mummified cats and a chained-up Fortunato. The only way to rewire the house is to knock it down. For the love of God.

The guy was an amateur. Cables? Surely the modern home cinema audio system connects by Bluetooth. But what do I know? I feel a trip down to Hi-Fi Serious coming on. Just imagine what this bloke is like at his workplace: he's probably rewired the office to feed microphones into the toilets and speakers into the stationery cupboard. Yes, with wire.

In the meantime I would like to find a way of either making some use of the idiot-wire threaded inside my walls – turn my house into a Faraday cage, perhaps – or retrieving all 67 miles of it and using the copper to replace the nearby church roof.

Home electronics and entertainment, duh. It's more fun to compute.

Alistair Dabbs is a freelance technology tart, juggling tech journalism, training and digital publishing. As you may have guessed, he is secretly envious of colleagues who had the initiative to smart-up their smart homes themselves. This is the right way to go about it, after all. Trust no-one else to do it for you. @alidabbs