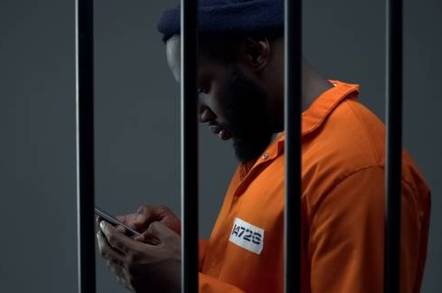 A convicted fraudster housed in a maximum security prison in Nigeria managed to pull off a $1m (£775,000) online scam from behind bars.

The African nation's Economic and Financial Crimes Commission this week said Hope Olusegun Aroke, who is serving a 24-year stretch for a previous fraud conviction in 2015, used a contraband cellphone and a network of accomplices outside prison to scam foreigners out of money online.

"The immediate riddle that confronted the EFCC was how it was possible for the convict to continue to ply his ignoble trade of internet fraud from prison," the commission said.

"Preliminary investigation revealed that that the convict, against established standard practice, had access to internet and mobile phone in the Correctional Centre where he is supposed to be serving his jail term."

Using that phone and internet connection, it is believed that Aroke was able to mastermind the scams (the EFCC does not say exactly what the caper involved) as well as register two bank accounts, shift money between those accounts and one used by his wife, and purchase $60,690 of real estate and a new Lexus RX 350 for his spouse.

Aroke appears to be something of a savant when it comes to internet fraud, even for a country like Nigeria where internet scams are or at least were big business.

The commission says his 24-year sentence for fraud came after he was found posing as a computer science student at a Malaysian university. While pretending to be studying in Kuala Lumpur, Aroke oversaw a massive criminal operation spread out between Asia and Africa. He was ordered to serve two consecutive 12-year terms.

While the EFCC has yet to figure out exactly how Aroke was able to get the phone, internet connection, and bank token he used to set up and maintain the fraud operation, they note he had earlier been able to get out of the prison for a brief period to get medical treatment.

It was found that when he left the prison to be treated for the unspecified illness, Aroke first stayed at the hospital, but later moved to a hotel where he was able to meet with his wife and family, as well as attend parties.

As you might imagine, this is not the sort of thing typically afforded to an inmate at a maximum security prison, and the EFCC is investigating that matter as well. ®

Banks 'not doing enough' to protect against bank-transfer scams

Must do more to identify fraudulent payments