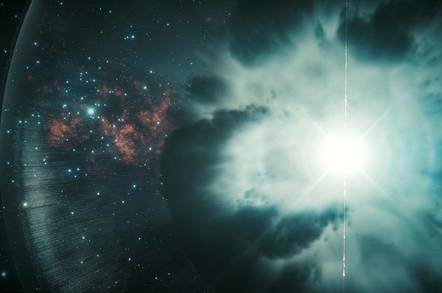 Scientists have detected the most-energetic photons yet seen from a gamma ray burst, with energies nearing a trillion electron volts.

Gamma ray bursts (GRBs) are the most powerful known explosions in the universe that occur when massive stars collapse into neutron stars or black holes. The spectacle features intense gamma ray plasma jets that eventually fade into an afterglow of energies, ranging from X-rays to radio waves. They’re difficult to study since the source of the flares are often in faraway galaxies, and eggheads haven’t quite figured out what triggers such energetic photons.

The measurements – which were taken from the Major Atmospheric Gamma Imaging Cherenkov (MAGIC) telescopes and the High Energy Stereoscopic System (HESS) array – have helped scientists piece together how GRBs rack up such high energies.

The MAGIC telescopes, based in the Canary Islands, focused their attention on a burst known as GRB 190114C to capture photons ranging from 200 billion electron volts to a trillion electron volts (0.2 TeV to 1 TeV). Such energies have been predicted but never observed before until now, according to two papers published in Nature on Wednesday.

“These are by far the highest energy photons ever discovered from a gamma-ray burst,” said Elisa Bernardini, leader of the MAGIC group at Deutsches Elektronen-Synchrotron, a research group studying high energy physics in Germany. “For comparison: visible light is in the range of about one to three electron volts.”

Did NASA probe detect a KILLER GAMMA-RAY burst in Andromeda?

The HESS array, in Namibia, also detected photons measuring over 100 billion electron volts (GeV) from another burst codenamed GRB 180720B, six billion light years away. Although the photons were less powerful, they were measured ten hours after the initial explosion, during the afterglow stage where the energies had already depleted by four orders of magnitude. The results have been published in a separate paper in Nature.

First, the charged plasma particles ejected from the explosion are deflected by strong magnetic fields and emit synchrotron radiation. These synchrotron photons can be boosted further by colliding with charged particles, a process known as inverse Compton scattering, to elevate them to extremely high gamma-ray energies. ®

Did NASA probe detect a KILLER GAMMA-RAY burst in Andromeda?

MY EYES! Earth engulfed by BRIGHTEST EVER killer gamma-ray burst

No radio broadcasts from neutron star