Free software credits not for you? How about a free tier instead? 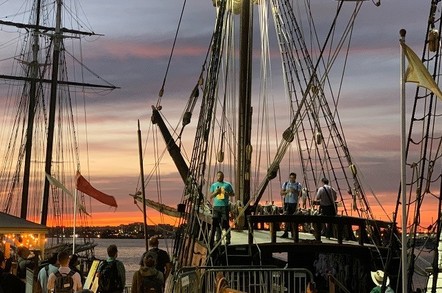 Kubecon 2019 CI/CD darling Codefresh took to the high seas of Kubecon to announce that it would be flinging $100m at the open-source ecosystem, as well as adding a free tier for its Kube-friendly pipeline tech.

Show me the money software credits

Sadly, it won't be as simple as upending a cash bucket over a fortunate open-source gang. "Chief technology evangelist" Dan Garfield told The Register that "the goal is essentially to do $100m worth of grants over the next 10 years" with things kicking off in 2020.

And don't expect Garfield to be signing a cheque: "It basically is going to provide grants so that people can gain access to enterprise versions of Codefresh and things like that."

While credits to run Codefresh pipelines will definitely be up for grabs, Garfield said the plan was to have more in the grant pot than just his company's own wares.

Making the announcement from the San Diego replica tall ship HMS Surprise, some may have been disappointed that Codefresh would not be flinging cold, hard cash from the decks. Developing open-source apps can be a costly endeavour and coders lacking the backing of an enlightened employer often struggle to fund tooling like CI/CD pipelines (or spend excessive time gluing together their own).

"People have been pretty excited about it," said Garfield modestly.

As for how to grab a grant, pretty much any open-source project can apply, according to Garfield, with some provisos. An open-source nuclear weapons repo, for example, probably won't succeed. "The way we envision it working is basically by looking for social signals for the projects that people care about the most... if 1,000 people tell us this project really needs this, then that's something we're going to grab."

And why pick something that bears a resemblance to a pirate ship to launch the fund? "Because it's badass, mostly."

Free, as in Free Tier

Garfield also picked Kubecon 2019 to officially open up a free tier of the company's pipeline platform. Codefresh had already added live debugging for CI/CD pipelines a week earlier, allowing developers to pop a breakpoint in a pipeline and check out how things are going via a debug console.

The competition, such as GitLab, have their own freebie options. Codefresh pricing previously started at $49 per month for the Pro tier, so a free level carried with it a certain inevitability.

The Basic tier, which is cloud-hosted, allows up to three users to enjoy unlimited builds and repos, although there's only one concurrent build. ®

Who's got my back(up)? Rival schools Trilio and Portworx battle it out for those Kubernetes bucks

Looks like we've got ourselves into another fine mesh: Enter the Service Mesh Interface