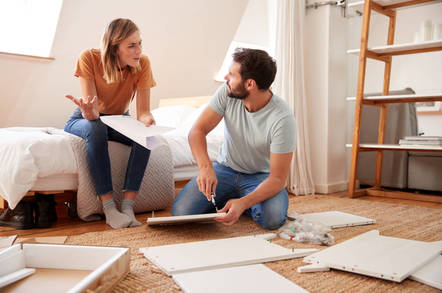 For many of us, assembling IKEA furniture is proof that while Scandinavians are no longer vikings, they can still ruin your day.

But, curse no longer at your Kullaberg or Västanby or whatever the fsck it's called now: a bunch of smart folks in America have developed robots that use machine-learning algorithms to construct IKEA kit for you. Well, in a simulation, or virtual environment. And fairly naively. Look, it's just cool, OK?

“We are announcing the launch of the IKEA Furniture Assembly environment as a first-of-its-kind benchmark for testing and accelerating the automation of physical assembly processes,” computer scientists from the University of Southern California (USC) said on Wednesday.

“The IKEA Furniture Assembly environment will be a stepping stone towards a new era of robots that can understand, plan, and skillfully execute precise physical manipulations, a far departure from the traditional robots of today.”

Over 80 pieces of furniture ranging from tables, shelves, chairs, and cupboards can be assembled in simulation. To make it as realistic as possible, the items start in their individual pieces, as you'd expect from IKEA, and are put together by trained AI software guiding the robotic arms, which can manipulate the furniture parts by grasping and moving things with their grippers.

Crucially, the boffins took the IKEA manuals for each of these pieces of furniture, modeled each part in Unity, and labelled all the connectors. These markings guide the sparse-reward-based software-controlled robots to fit together the furniture from the components, the researchers explained in a paper on arXiv.

Designers were hired to painstakingly model each piece of furniture from the IKEA manual, and then labelled each part in order to identify the connectors, Youngwoon Lee, first author of the paper and a PhD student at USC, explained to The Register.

The lighting, background, colors, and textures in the environment can be randomised to test whether the robots will, in real life, be thrown off by changes in their surroundings.

But there is one really glaring issue in using this environment: it, right now, cannot handle robots using any tools to nail or screw things together. It supports slotting stuff together. So, it probably can't build that bed just yet. Still if you’d like to give it a go, here’s the code. It’s in beta at the moment, so there are only 10 furniture models to choose from.

“Furniture assembly is a complex manipulation task even for humans, requiring perception capabilities, high-level planning, and sophisticated low-level control. Therefore, it is well suited as a benchmark for control algorithms aiming to solve complex tasks,” the eggheads concluded.

The trickiest object to put together is a shelf with 25 different pieces, Lee said. “Not only does it have many parts, but some parts are small and irregularly shaped, making it difficult for the robot to grab.”

“This simulated environment is a step towards real-world assembly robots; there are some details we need to get right and the robots will not be immediately “ready” for the production,” Lee said. ®