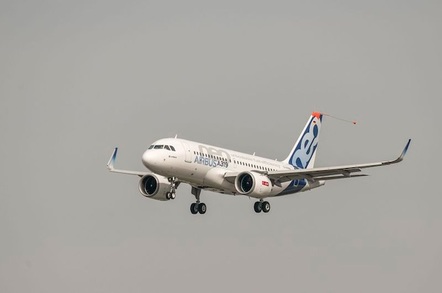 The drone was reported by the pilots of an A320-series airliner (pictured, an A319neo) landing at Gatwick Airport

Two airline pilots reported a near-miss with a drone while just 30 seconds from touchdown at London Gatwick airport earlier this year, an official report has revealed.

Both the captain and first officer (FO) of an Airbus A320 landing at Gatwick in the evening of 8 July this year saw the errant drone, which the first officer said he recognised as a DJI Inspire quadcopter.

A report from the UK Airprox Board (UKAB), a reporting organisation for pilots concerned about near misses with other aeroplanes, said the captain exclaimed “drone” as he saw the unmanned vehicle “directly in front of the aircraft, slightly to the left at a range of about 100m.”

The drone passed the left hand side of the Airbus at a distance of 20m, the pilots reported. Worryingly, the drone appeared to be directly in line with the centre of the runway – and by sheer chance the airliner was slightly off to the right.

“The crew believed that if the autopilot had still been engaged, and they were on the centreline, there was a very high probability that they would have struck the drone,” said the UKAB, thanking “providence” that the drone didn’t hit the Airbus or get sucked into one of its engines.

The immediate question that occurs to El Reg is why didn’t the much-vaunted drone detection systems deployed around Gatwick after that infamous drone incident in December 2018 pick up this quadcopter?

Gatwick Airport did not engage with The Register’s questions. A PR representative refused to say whether arriving flights were halted for safety, though the pilots told air traffic control about the drone and later filed a report with Sussex Police.

The A320’s first officer told the UKAB that he is a drone enthusiast and recognised the craft as a DJI Inspire. At a height of 350 feet above the runway and allowing for the inevitable margin of error in a fast-moving, high-workload situation, the drone would have been about a (nautical*) mile and a quarter from the runway’s touchdown zone – or, put another way, just over half a mile from the airport boundary fence.

If someone was flying a drone in this area, next to an airport car park at 6pm on a summer’s evening and on the final approach path to the main runway, it should not only have been visible to the naked eye from the ground but also triggered airport security to track down the craft’s operator, yet there is no evidence this happened.

From the bare facts in the UKAB summary, there is little to cast doubt on the Airbus pilots’ report; both would have been focusing on a safe landing, looking ahead through the cockpit windows instead of being focused on instruments. Both saw it pass their aircraft. While the FO may have been mistaken about the precise type of drone, if he was confident enough to positively ID the make and model and it was seen by the aircraft captain as well, that is compelling evidence in support of the idea that something was being flown there.

It is a crime to fly drones near airports. A Civil Aviation Authority spokesman said: “It is illegal to fly drones close to airports without permission and anyone flouting the rules can face severe penalties including imprisonment. Anyone operating a drone must do so responsibly and observe all relevant rules and regulations. The rules for flying drones are designed to keep all airspace users safe.”

The rules on where and when one can legally fly a drone can be found at www.dronesafe.uk

If Gatwick airport security – and, presumably, Sussex Police – were unable to either see this reported drone or catch its operator, and one of the systems deployed to stop a repeat of the December 2018 shutdown had been removed, then hard questions must be asked of airport management about the £4m-£5m they reportedly spent on anti-drone measures. If someone was able to fly a drone across the path of a landing airliner without being caught or even identified, that money has been wasted. ®

* Commercial aviation measures distances in nautical miles, visibility in metres and km, heights and altitude in feet, speeds in nautical mph (knots) and weights in kilograms and tonnes.