Mind where you're pointing that thing, Al 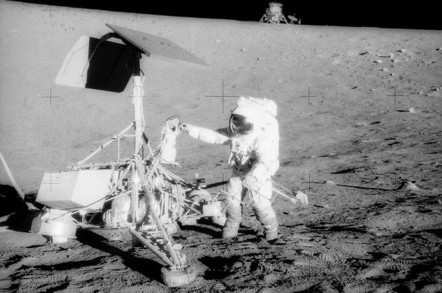 Pete Conrad studies the camera of the Surveyor probe, with the Apollo 12 LM in the background (pic: NASA)

Part 2 Welcome to the second part of our Apollo 12 retrospective, where we look at the breaking of cameras and the (almost) breaking of the lunar module pilot. You can read about the eventful launch in Part 1, here.

After Apollo 11 missed its intended landing spot by quite some distance, one of Apollo 12's stated goals was to plonk the lunar module on the surface of the Moon with more accuracy.

After all, what was the point in having geologists identify regions of interest if the intrepid 'nauts ended up miles and miles downrange?

Said intrepid 'nauts were Commander Charles "Pete" Conrad, Command Module Pilot Dick Gordon and Lunar Module Pilot Alan Bean. And to deal with the location issue, Conrad, who could easily have been the first man on the Moon had Neil Armstrong not been made of sterner stuff, was tasked with touching down near to an identifiable landmark. In this case, it was NASA's Surveyor 3 probe.

After the launch and subsequent burn of the S-IVB stage to send the Apollo stack to the Moon, the CSM Yankee Clipper performed the manoeuvre to extract the Lunar Module (LM), Intrepid.

Conrad and Bean checked out the LM for damage from the lightning strike and, finding all was well, the crew settled in for the cruise to the Moon.

Unlike previous missions, Apollo 12 used a hybrid trajectory with a single midcourse manoeuvre needed to drop the spacecraft into a non-free-return lunar orbit (something with which the next Apollo mission would become all too familiar).

On 17 November, Apollo 12 passed behind the Moon and into orbit. A further burn of the CSM's SPS left the Yankee Clipper and Intrepid in a 62 by 76-mile lunar orbit.

Conrad and Bean began their descent on 19 November, touching down approximately 110 hours and 32 minutes into the mission. The duo landed 950 miles west of where Apollo 11 had touched down and, crucially, just 535 feet northwest of Surveyor 3.

Gordon, orbiting overhead in the CSM, was able to make out both Intrepid and Surveyor 3 and, at 115 hours and 10 minutes, Conrad opened the hatch of the LM, clambered down the ladder, and became the third man on the Moon.

"Whoopee! Man, that may have been a small one for Neil, but it's a long one for me."

Alan Bean followed, and the duo commenced the first EVA of the mission. Not everything went entirely to plan.

Hopes for colour television broadcast from the surface of the Moon were dashed when Bean inadvertently pointed the camera at the Sun, burning out the poor thing and triggering generations of conspiracy theories.

The pair had also brought a timer to allow a picture with both astronauts in the shot to be taken on the Moon, but managed to misplace the device until it was too late to set up the camera.

As well as erecting the US flag, the two astronauts also deployed the first complete Apollo Lunar Surface Experiments Package (ALSEP) as well as collecting contingency samples from the surface before returning to the LM after nearly four hours of work.

The second EVA saw the pair head to the Surveyor 3 probe and collect its camera, scoop as well as bits of cable and glass to allow scientists on Earth to see how the equipment had fared.

Famously, boffins speculated that bacteria left on Surveyor's camera by Earthbound engineers had managed to survive the lunar sojourn, a claim that has later been disputed.

Conrad and Bean returned to the LM and, after just over 31 hours on the surface, the ascent stage of Intrepid fired to send the duo back to Gordon, orbiting above in the Yankee Clipper.

Speaking in Pontefract, Yorkshire, back in 2013, Bean recalled the moment Conrad handed over control of the LM to allow Lunar Module Pilot Bean to take the vehicle for spin.

"Wait a minute," said Bean, "the people in Mission Control are not going to like this..."

"Don't worry," replied Conrad, "we're on the back side of the Moon. They'll never know."

This hack was at that talk and I recall Bean's eyes turning misty as he added: "Pete Conrad was the greatest astronaut I ever met."

Intrepid docked with the Yankee Clipper in Lunar orbit at 145 hours and 36 minutes, reuniting Bean and Conrad with Gordon. The trio eventually splashed down into rough seas on 24 November, with the impact registering about 15G.

The force of the impact into the ocean was enough to knock portions of the heat shield loose and also send the 16mm camera onboard the Command Module flying toward the head of the Lunar Module Pilot, temporarily stunning Bean.

The mission was a huge success but was to be the last for Dick Gordon who had been slated to walk on the Moon as part of Apollo 18, a mission that would be the victim of budget cuts. He retired from NASA in 1972, enjoying a career in private industry before his death in 2017 at the age of 88.

Conrad would go on to command the Skylab 2 mission to rescue America's stricken space station. He retired from NASA in 1973 and in the 1990s was involved in the Delta Clipper single-stage-to-orbit project. Conrad died in 1999 from injuries sustained in a motorcycle accident.

As for Bean, he returned to the Apollo Applications Project and commanded the famously hardworking Skylab 3 crew.

Alan Bean retired from NASA in 1981 to focus on painting. Indeed, one of his works can be seen at Kennedy Space Centre's Saturn V exhibit. Bean added tiny parts of patches from his spacesuit to his paints to impart Moon dust to his paintings as well as imprints from Moon boots to add texture.

While Apollo 12 is a clickhole in its own right, we found Pete Conrad's biography Rocket Man particularly insightful as well Alan Bean's Apollo: An Eyewitness Account, which includes many of his paintings.

Andrew Chaikin's A Man on the Moon remains essential reading.

We'd also strongly recommend a viewing of the "That's all there is?" episode of HBO's From The Earth To Moon to get a feel for the adventures of the Apollo 12 crew.

Alan Bean's 2013 Pontefract lecture is also preserved on YouTube and is well worth a listen. ®