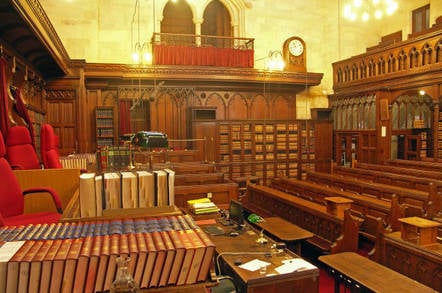 The view from the witness box in Court No.4 of the Royal Courts of Justice, the Lord Chief Justice's personal courtroom. Pic: Judicial Office

A Briton once suspected of hacking Pippa Middleton's iCloud account – although he was cleared after a police probe in 2016 – now faces deportation to America.

Nathan Wyatt, who is said to have used the handle "The Dark Overlord" online, is accused by American prosecutors of conspiracy, aggravated identity theft and three counts of threatening to damage a computer. London's High Court rejected his appeal against an extradition order earlier this month.

Wyatt, 39, was jailed by Southwark Crown Court in 2017 after pleading guilty to more than 20 charges of using stolen credit card details, blackmail and "possession of an identity document with an improper intention" as Lord Chief Justice Burnett of Maldon put it in his judgment of 6 November.

The Lord Chief Justice said that Wyatt is accused of targeting five victims in total, including sending "threatening messages" to target companies' executives along with details of their family members; healthcare providers; demands for 500 Bitcoin as ransom; threats to publish "confidential client information" from an accounting firm; and a threat to report a CEO to "various government agencies" unless a £400,000 ransom was paid.

"The victim was informed their Dropbox and Paypal accounts had been hacked and that their funds had been paid out on Paypal," Crown Prosecution Service (CPS) barrister Daniel Sternberg told Westminster Magistrates' Court in January, alleging that "The Dark Overlord" had used a Gmail account. "They were told to respond or they would be publicly named as the source of their client's suffering."

Although he was previously prosecuted in the UK, Wyatt's alleged crimes against US companies and citizens were not part of the British case against him. US prosecutors filed an extradition request against him last year while he was still serving a 42-month sentence*, with the demand being handed to him immediately upon his release from prison in August.

Wyatt appealed against the deportation order on the grounds that American prosecutors could have given their evidence to Britain's CPS for a UK trial on the new charges. In addition, Wyatt's barrister Kate O'Raghallaigh argued in the High Court that District Judge Tempia gave too much weight to the fact that US prosecutors have 15 witnesses lined up to give evidence against him.

The Lord Chief Justice, along with Mrs Justice May, did not agree with this:

… yet the victims of a crime have an interest in the legal proceedings beyond the narrow compass of being a witness and giving evidence. They should, if they wish, be able to attend a trial. They should be in a position to have continuing contact with the prosecuting authorities. They are likely to wish a prosecution to take place in the jurisdiction where they suffered the harm relied upon, subject to their domestic legal order culminating, if there is a conviction, in an appropriate local sentence. This case involves corporate victims, although acting through individuals and owners who are alleged to have been threatened, their families and hundreds of individuals whose personal medical data were disclosed. The judge cannot be faulted for having considered this to be a statutory factor which weighed in favour of extradition, nor for thinking it an important matter.

Wyatt is likely to stand trial in the US federal district of Eastern Missouri. The CPS's Sternberg alleged in January that Wyatt had used his own IP address "to register a telephone number that was used to send threatening messages" as well as to register a Gmail address which he is said to have used as his alias for blackmail.

The same number was also linked, so Sternberg said, to a Whatsapp account "which used Mr Wyatt's picture as the avatar" and to set up a Paypal account to receive money stolen from The Dark Overlord's victims. ®

* British convicts normally serve a maximum of half of a prison sentence handed down by judges, with that figure falling to around 30-40 per cent of the sentence depending on the opinion of the Prison Service. Officially the reason for this discounting is "good behaviour" while imprisoned, though it applies more or less automatically to almost all offenders.