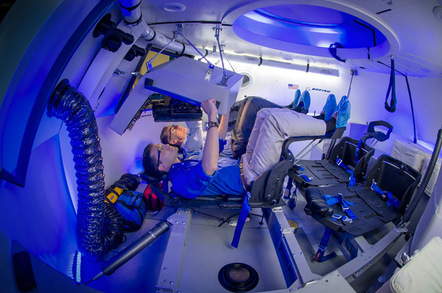 This was not supposed to have happened. SpaceX and Boeing should have been flying crew to the International Space Station by now thanks to fixed-price contracts.

Or not so fixed, as the inspectors observed: "NASA agreed to pay an additional $287.2m above Boeing's fixed prices to mitigate a perceived 18-month gap in ISS flights anticipated in 2019 for the company's third through sixth crewed missions."

The space agency has had to admit that the US presence on the multibillion-dollar orbiting lab is likely to drop to a single crew member in 2020.

The solitary astronaut's tasks will likely be limited to keeping the US segment alive while their Roscosmos colleagues presumably restrain themselves from pointing and laughing.

As a reminder, Boeing has yet to manage even an uncrewed flight to the ISS, unlike SpaceX, and has recently demonstrated that it could manage a pad abort in a test that can only charitably be called successful. At least a crew would have survived.

The problem with the ongoing commercial crew delays is that NASA has come to the end of the line when it comes to stuffing its astronauts into the venerable Russian Soyuz.

Some background: NASA has spanked the best part of $3.9bn on 70 Soyuz seats to the ISS (including five purchased through Boeing) as the Shuttle programme wound down prior to Atlantis's final landing in 2011. Prices for the Soyuz seats between 2006 and 2020 have ranged from $21.3m to $86m for each jaunt.

Commercial crew missions should have started in 2017 (NASA created the Commercial Crew and Cargo Program Office more than a decade earlier) but NASA wound up having to buy 12 Soyuz seats for "approximately $1bn" because Boeing and SpaceX were woefully behind schedule.

Unsurprisingly, the cost of those Soyuz seats has continued to climb because, well, Roscosmos is hardly a charity aimed at flying US 'nauts following the perhaps premature retirement of the Space Shuttle.

There's one strung up from the ceiling in Kennedy Space Center if you're ever passing. A Shuttle, not an astronaut.

For its part, Roscosmos has cut Soyuz production to the point where there will be only one mission every six months, down from two. In any event, lawmakers would view any attempts by NASA to purchase additional seats after 2020 very dimly.

So, Commercial Crew to the rescue, right? Er, no.

As of May 2019, Boeing and SpaceX's contracts were valued at $4.3bn and $2.5bn respectively. Of those amounts, Boeing's costs for development and test flights were $2.2bn, while SpaceX's were $1.2bn.

The two were supposed to provide six round-trip missions and, with four 'nauts per flight, each seat would cost around $90m on Boeing's Starliner and $55m on Musk's space jalopy.

Of course, in the space world there are lies, damn lies, and mission costs. A SpaceX Falcon 9 weighs in at $55m, while Boeing's Atlas V launcher comes in at $90m. And NASA's contracts are, in theory, fixed price.

However, theory and practice do not always meet, and the NASA has, according to its inspectors, found ways of adding more cash to the pot. For example, both SpaceX and Boeing have struggled with parachutes. And both (SpaceX with impressive explosiveness) have battled balky abort systems.

"The additional parachute testing for both contractors illustrates where NASA added more funding to the CCtCap contracts for both Boeing and SpaceX," the report noted.

Of course, if NASA's Commercial Crew chums, already three years late, fail to make good on their promises for 2020, then there is a very real chance that come October next year, there will be no US astronaut aboard the ISS – an outpost on which US taxpayers have lavished billions.

The conclusion of the Office of the Inspector General is stark: NASA needs to get real with its commercial crew schedules and go cap in hand to Congress in the hope of upending the cash bucket on its Russian partners for more Soyuz. The alternative is a potential US de-crewing of the ISS.

As far as crewed vehicles are concerned, American industry is struggling to deliver much more than museum exhibits right now. ®