If at first you don't succeed, Phi Phi again 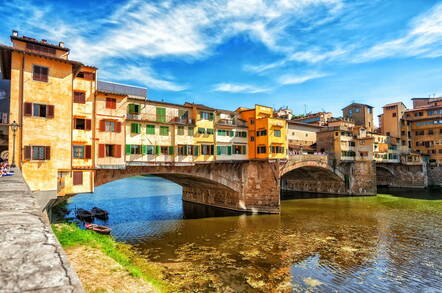 SC19 Intel today confirmed the identity of the GPU-based math-accelerator chip it will offer to supercomputer builders.

The announcement of the Ponte Vecchio part, named after that medieval bridge in Italy, coincided with the start of the Supercomputing 2019 conference in Colorado, USA, on Sunday.

Ponte Vecchio will be fabricated on Intel's forthcoming 7nm node, and not its troubled 10nm process. It will use Chipzilla's exascale Xe architecture and Foveros and EMIB packaging, and support high-bandwidth cache and memory and CXL-based interconnects.

It is described as a general-purpose GPU albeit one tuned for AI and applications found running on top-end supers – think physics simulations and weather modeling and the like. You won't be able to buy this as a gaming graphics processor. But yes, it could probably, perhaps, possibly run Crysis. It will, according to Intel, offer high throughput of double-precision floating-point calculations, and sport vector matrix math engines.

Not much else is known about Ponte Vecchio publicly. It is likely to arrive in 2021 as it will form the brains of the US government's $500m 1,000-petaFLOPS Aurora supercomputer, which will glue Ponte Vecchio accelerators to Intel Sapphire Rapids Xeon processors, as well as blobs of storage and other bits of technology.

In fact, we're told each Aurora compute node will sport dual 10nm Sapphire Rapids processors and six Ponte Vecchio chips, all using a unified memory architecture between the CPU and GPU cores. The Cray-built monster will span more than 200 racks, and have at least 10PB of RAM and 230PB of storage.

This is, by the way, Intel's second crack at rolling out Aurora: its earlier attempt using its many-core Xeon Phi chips caused it to miss Uncle Sam's deadlines, forcing it back to the drawing board to come up with another approach. Now Chipzilla's returned with its Ponte Vecchio GPUs to hopefully accelerate Uncle Sam's number-crunching to exascale levels.

If you're keen to get your hands on this sort of tech, don't forget Intel previously promised to ship 7nm data-center-grade GPUs in 2021.

Intel will also this week talk up its oneAPI programming interface for controlling systems that use a mix of CPU and GPU cores, FPGAs, and other silicon. This API will also be used in Aurora. Think of it as Intel's answer to Nvidia's CUDA.

Speaking of Nvidia, Intel will use a CXL-based interconnect called Xe Link to connect the Ponte Vecchio accelerators, kinda like Nvidia's NVSwitch, in Aurora and other systems. Competition in this space is heating up.

Finally, you can request remote access to Intel hardware to test and evaluate projects, including oneAPI gear, using Chipzilla's Devcloud.

You can follow this year's Supercomputing conference news, and dive deep into big-iron tech, by heading over to our HPC sister site, The Next Platform. ®