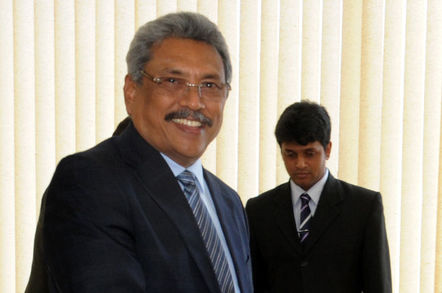 A former Unix sysadmin has been elected the new president of Sri Lanka, giving hope to all those IT workers who fear they are trapped in a role where the smallest of decisions can have catastrophic consequences if it goes wrong.

Gotabaya Rajapaksa, younger brother of former president Mahindra, won the popular vote in an election held on Saturday (16 November). He is notable to The Register's readership for his stint working in America as a Solaris system integrator and later as a Unix sysadmin for a Los Angeles university.

In a speech delivered in 2010 to a Microsoft event in Sri Lanka, Rajapaksa junior said: "I worked as a system integrator and Unix systems administrator... my area was Solaris."

He went on to quip: "My boss was completely anti-Microsoft, he didn't like to see the desktop. But I think Microsoft has [made a] lot of changes to society, in using computers, to the normal man."

Having risen to the rank of lieutenant colonel in the Sri Lankan army, Gotabaya retired from military service in the 1990s, obtained a master's degree from Colombo University and then emigrated to the US, working for Loyola Law School as a systems operator in its IT department.

In 2005 he returned to Sri Lanka after his brother was elected president in 2005, to be appointed defence secretary. There he oversaw the brutal crushing of the decades-long Sri Lankan civil war instigated by the island's Tamil separatists, mostly concentrated in its north. Although the military campaign succeeded in destroying the Tamil Tigers terrorist group as an effective force, it also triggered widespread condemnation from Western human rights charities and allegations that State forces committed war crimes against Tamils.

"We stand on the brink of economic revival that has been made possible by our defeat of terrorism a few months ago. Terrorism was the main obstacle to our economic development over the last 30 years," he said in 2010.

The BBC also linked Gotabaya with the abduction, torture and murder of journalists who criticised the 2005-2015 Rajapaksa government. Even one of his presidential predecessors, Chandrika Kumaratunga, became an outspoken critic of the previous government, condemning its policies against the island's two main Tamil and Muslim minorities.

Gotabaya is not the first president to rise from a humble job in the West: Adama Barrow, currently president of The Gambia, was once a security guard at Argos on London's Holloway Road.

As for the new Sri Lankan president's Unix and Solaris experience, he might find himself a little out of date these days. Solaris has been forked into various open-source flavours, including OmniOS. However, the full-fat proprietary version of Solaris 11.4 is receiving "update releases" every summer, as we reported last April.

We have asked the Loyola Law School IT crew if anyone there remembers Rajapaksa. ®

It's gonna be spectacular!