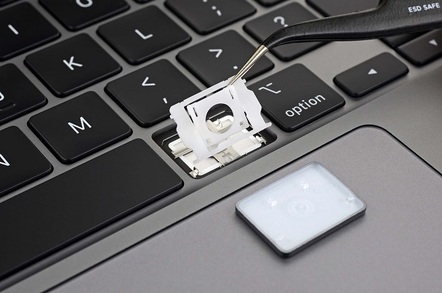 The key mechanism in the 2019 16" MacBook Pro is very similar to that in older models Pic: iFixit

The MacBook keyboard nightmare is over – Apple's latest attempt reverts back to something remarkably similar to the key design it was using up until 2016. The one that worked.

The geeks at iFixit have got their paws on a new MacBook Pro and are in the process of taking apart its keyboard. It's all but identical to the old Magic boards – so much so that old keys even fit the new one.

"The new Magic Keyboard in the 16-inch MacBook Pro uses a scissor switch that looks almost identical to the switches in the desktop Magic Keyboard, and MacBooks sold before the butterfly blunder," they said. "The switch is two plastic pieces, crossed, with a pivot in the middle to control key movement. It's more robust than butterfly switches, and there's more space to tolerate debris within its movements."

The keys are about 0.2mm thicker than the old ones and have about 0.5mm more travel. The iFixit crew also noticed stronger clips connecting keys to the scissor switches, which should give a better chance of reconnecting if a key is removed for cleaning or repair. But the changes result in a keyboard which doesn't appear much thicker or heavier.

The geeks mused wistfully that maybe this is evidence of a new Apple more responsive to demands from customers for more easily repairable or upgradeable hardware...

The problems began in 2015 and 2016 for the MacBook Pro. Apple chose to create a thinner keyboard with less key travel, relying on butterfly hinges. Initial response was not ecstatic with complaints about the sound and feel of the new keys compared to the company's previous keyboards.

But things got worse when the boards began to fail early and often. Space bars were the main culprits but any key could be knocked out by even the tiniest specs of dust.

In 2018 Apple added a rubber prophylactic layer to keep out the gremlins, although publicly it insisted the move was to reduce noise.

Apple rejected all complaints until finally offering replacements, repairs and an extension to warranties.

The saga has resulted in a class-action suit from disgruntled fan people.

There's more from iFixit here but the full teardown will be published later today. ®