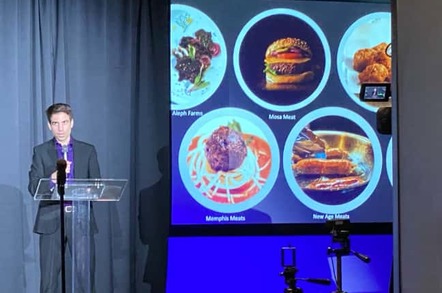 At the second annual Cultured Meat Symposium in San Francisco on Friday, donuts featured prominently on the breakfast menu and lunch involved only plant-based options. Attendees the day before had the opportunity to sample mechanically prepared beef burgers, courtesy of robo-restaurateur Creator, but lab-fabbed meat didn't make an appearance. Give it about five years – that was a guestimate from one attendee.

In 2013, a cultured burger – meaning animal cells grown in a bioreactor rather than a pretentious patty – cost about €250,000 (~$325,000 at the time). During a conversation with The Register before Friday's keynote, Jonathon Parrish, a bioengineer at New Age Meats, which is working to develop scienced sausage, estimated that the cost today would be more like 100x farm-raised meat.

For beef priced at $10 per pound, that works out to a theoretical $250 McDonald's Quarter Pounder before any retail markup. Even in San Francisco, where $50 burgers find buyers, that's still a bit pricey.

Nonetheless, thanks in part to what keynote speaker David Kay referred to as "the meatball heard round the world" in 2016, not to mention the success of plant-based foods biz Impossible Burger, investment has started flowing into the cell-based meat industry.

Kay said several companies represented at the conference recently closed their Series A funding. The expectation among investors is that production costs will continue declining to the point where cultured meat products can compete for consumer spending.

Kay is the senior communications director for Memphis Meats, an early entrant into the cultured meat business when it was founded in August, 2015. It's now a leading contender among the 50 or so like-minded firms, thanks to last year's investment from American agricultural mega-corp Tyson Foods. Other traditional food firms that have developed an interest in vat- or veg-protein include Cargill, Bell Foods Group, PHW Group, and even IKEA.

The fact that Kay is focused on messaging, rather manufacturing or science, says a lot about the state of the cultured meat industry and its present priorities. As he acknowledged, how the industry talks about its planned products - and how the public receives those messages - will have a huge effect on the market viability of cell-based meat.

The science, if not solved, at least has a promising path. Economical scale has yet to be achieved. And demand needs to be finessed. But at least one rationale for turning cultured muscle cells into meat products continues to be difficult to assail: No animal needs to be slaughtered.

You might need to cut a chunk out of a cow as a biopsy sample now and again to get starter cells, but the discreet bloodbath of the modern slaughterhouse could be done away, given enough time and market affinity.

There should be environmental benefits too, like less use of land for grazing and lower production of greenhouse gases. But much depends on the cleanness of the energy used to run the bioreactors and sustain the cells. A recent Oxford University study suggests a transition to cultured meat production wouldn't be all that helpful from an environmental perspective unless it's also accompanied by greater use of clean energy sources.

"What was a wistful daydream just five years ago is now an inevitability," said Kay. But he stressed the need to move cautiously because the first cell-based meat products to reach the market will define consumer expectations for years to come.

"Let's just all agree to nail that first product," he said, noting how the vegan label has come to repulse consumers, a consequence of the stigma created by insufficiently appealing early plant-based products.

"While the move fast and break things Silicon Valley approach might work for a website or app, consumers expects something more when you're dealing with food," he said.

"If anything bad were to happen with the first product, it would really sully the industry," agreed Nicolas Legendre, director of biological research at New Age Meats, during a subsequent panel discussion.

Social media companies can traffic in toxicity then apologize when things go south and console customers that at least the abuse came for free. Companies playing in the cell-cultivation arena can't be so cavalier.

If your bioengineered food products start killing people or pets, you're done – this isn't a mature industry like airplane manufacturing where a product's utility allows for occasional casualties. Hence, everyone involved in coaxing cells into something edible appears to be committed to safety, at least at this point, before competition has companies contemplating lethal cheats like the addition of melamine.

In an interview with The Register, Abril Estrada, co-founder and chief product officer at Wild Earth, a biotech biz focused on cellular agriculture and alternative proteins for pet food, said scalability, consumer acceptance, and regulation represent the major issues for like-minded companies at the moment.

"Scalability, from a cost perspective, is the biggest issue," said Estrada. "Because right now, I don't think there's any company that has figured out how to grow [animal cells] at the large scale or at the commercial scale."

Regulation, an anathema to data-grabbing tech companies, looks like a relatively minor obstacle, at least outside of bureaucratic Europe. An attendee who spoke with The Register said Singapore might be the place where cultured meat products first take off because the regulatory obstacles there are minimal. In the US, food oversight agencies are already trying to work with the industry before it has any products to market.

The cultured meat industry reached a milestone in May when the Department of Agriculture’s (USDA) Food Safety and Inspection Service (FSIS) and the Department of Health and Human Services’ (HHS) Food and Drug Administration (FDA) announced an agreement to jointly monitor the production of food products for humans that come from the cells of livestock and poultry.

The formation of a dedicated trade group, the Alliance for Meat, Poultry & Seafood Innovation, in August, underscores that cell-based meat has moved from an academic concern to a matter requiring the engagement of a broad set of stakeholders – or perhaps "steakholders."

Deferential government officials and lobbying won't win friends among traditional meat producers – the Barnyard – but Kay insists that relationship doesn't have to be antagonistic. "We recognize that we have a lot of common ground with the Barnyard, and we expect to find many opportunities to work with them in the future," he said.

Meanwhile, a dozen or so states have passed bills to prevent cell-based meat from being labelled "meat."

"It's worth noting that we still have a long way to go," said Kay. "If we look briefly to our adjacent industry, a plant-based meat industry, we will notice that just a single company in the space, Impossible Foods, has raised around 750 million dollars, almost ten times the amount of money that the entire cell-based meat industry has raised. And for that, it has captured far less than one per cent of the meat market." ®