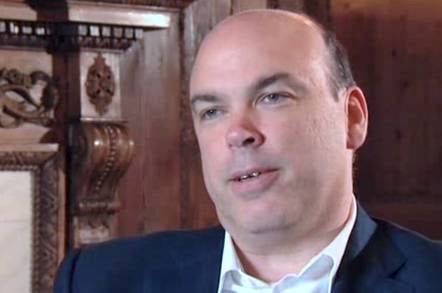 The US State Department has until 1 December to get its paperwork in order and show how it wishes to proceed in attempting to extradite ex-Autonomy boss Mike Lynch to face charges.

According to the federal court filing system, at a 15-minute hearing on 13 November in a San Francisco court, Judge Charles Breyer told lawyers "to file a declaration by December 1, 2019 outlining the deadlines of the extradition proceedings for Michael Richard Lynch".

Lynch and Stephen Keith Chamberlain were indicted in November last year, accused of 14 counts of wire fraud. Documents filed with the court note that Lynch and Chamberlain made millions of dollars from the deal. The two are accused of falsely inflating the true value of Autonomy's business by fiddling revenue reporting, misleading auditors and market analysts.

All alleged offences relate to the $11bn sale of Autonomy to HP. US prosecutors want $815m back from Lynch.

Lynch is also facing a £5bn civil case in the UK.

Lynch has previously denied the charges, and his lawyers said last November: "There was no conspiracy at Autonomy and no fraud against HP for the DoJ to take up. HP has a long history of failed acquisitions. Autonomy was merely the latest successful company it destroyed. HP has sought to blame Autonomy for its own crippling errors, and has falsely accused Mike Lynch to cover its own tracks."

A spokesman for Lynch told The Register he believes the matter should remain in the UK, where it is currently being litigated. Lynch continues to strenuously deny the allegations. The spokesman noted the indictment has been open for nearly a year and that Lynch has yet to receive any extradition request to respond to.

Meanwhile, in the surreal world of US law enforcement and border control, Lynch's co-defendant has asked for clarity around permissions to fly back to the US, despite being cleared to do so by the court.

According to an earlier hearing, Stephen Chamberlain has struggled to get permission from Immigration Customs Enforcement (ICE) to travel to the US.

The documents explain that Chamberlain lives in the UK and had court permission to travel to America on occasion, or anywhere else that has an extradition treaty with the US.

You can almost hear the grinding of teeth hidden beneath the legalese.

The filing by Chamberlain's lawyers, which seeks an order for clarification of his bond terms to wave at the immigration authorities, reads:

The prosecutors assigned to this case and the FBI case agents have indeed diligently sought Mr Chamberlain's parole into the United States so that he can attend court proceedings. But on each occasion, their efforts have been stymied by bureaucratic red tape, which has resulted – as their filing acknowledges – in last-minute approvals without any notice (literally hours before Mr Chamberlain is scheduled to fly) and a complete lack of communication by the immigration authorities even to their FBI counterparts. And although the prosecutors and FBI agents had no objection to Mr Chamberlain's travel to the United States for other purposes (and attempted to secure authorization for such travel), apparently the immigration authorities have communicated a blanket refusal to even consider allowing Mr Chamberlain to travel for other purposes.

There you have it. Even the FBI has issues with ICE. ®