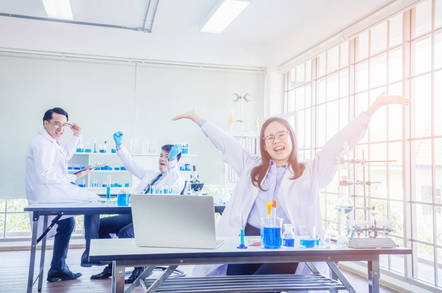 A team of researchers have built a terahertz laser that might one day see through clothes, book covers, and even skin, using laughing gas, according to a paper in Science.

The device operates in the terahertz range - a region of the electromagnetic spectrum above microwaves and below visible light. Terahertz lasers are relatively rare, since the wavelength of light is tricky to produce and control. Although they have been built before, older models shot infrared light through long tubes of methyl fluoride gas and were too clunky to be practical.

The new laser built by researchers led by the Massachusetts Institute of Technology (MIT) is much niftier. All the components required fit inside a shoe box and functions in room temperature. The light can also be tuned too, producing terahertz waves in the range of 0.251 to 0.955 terahertz (10^ 12 Hz).

The wacky gizmo works by zapping nitrous oxide, more commonly known as laughing gas, with an infrared light quantum cascade laser. A small cavity inside the device was filled with laughing gas.

These molecules are excited by the laser’s energy and react by vibrating and rotating. The electrons can jump between energy levels, emitting photons in the terahertz range to create a laser.

“By tuning the terahertz frequency, you can choose how far the waves can travel through air before they are absorbed, from meters to kilometers, which gives precise control over who can ‘hear’ your terahertz communications or ‘see’ your terahertz radar,” said Steven Johnson, co-author of the paper and a mathematics professor at MIT.

“Much like changing the dial on your radio, the ability to easily tune a terahertz source is crucial to opening up new applications in wireless communications, radar, and spectroscopy.”

Scientists hope that terahertz lasers might lead to “T-ray vision”, where the light can penetrate through fabric, thin objects, and skin without the harmful effects of more powerful energies like X-rays.

“These gas lasers were for a long time seen as old technology, and people assumed these were huge, low-power, nontunable things, so they looked to other terahertz sources,” said Johnson.

“Now we’re saying they can be small, tunable, and much more efficient. You could fit this in your backpack, or in your vehicle for wireless communication or high-resolution imaging. Because you don’t want a cyclotron in your car.” ®