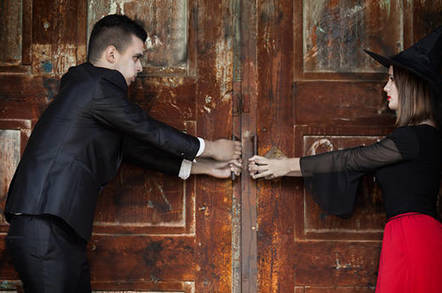 Something for the Weekend, Sir? Help, I forgot my keys! [rummage] Oh yes, of course – ah don' need no stinkin' keys, my front door locks smartly.

I took some convincing before taking the smart lock plunge but now I'll never go back. Carrying the immense weight of two metal keys on my person, and suffering from all the discomfort and inconvenience that implies, was such a worry all the time – especially with the constant risk of loss or theft. Getting a new key cut to replace a lost one can cost as much as, ooh I dunno, nearly five pounds!

Yup, it's much more convenient, less cumbersome and generally safer using a smartphone instead.

Except... touching the big UNLOCK button on screen doesn't seem to be doing anything. Maybe I have too light a touch: I'll try tapping. Tapping harder now. Punching. Ow.

Aha, I know what the problem is: the 4G reception in front of my house is very weak and my phone can't connect to the home security system. No worries, I can walk down the street where the reception's stronger. Shame I can't actually see my front door from there but hey ho.

Nuts, the door must have relocked itself after waiting a few seconds as I walked back up the street. Maybe Mme D is at home. I'll try the old-fashioned not-at-all-smart doorbell. Stupid doorbell, for some reason you can't hear it from outside the house so you never know whether it's rung or not. I'll try knocking.

No response. I wonder if Mme D is wearing her earbuds, sitting on the sofa guffawing at YouTube videos linked from the Daily Mail's sidebar of shame. I'd better phone her to find out.

[plod plod plod] Hello? Yes it's me, I'm outside. No, you can't see me at the door, I'm halfway down the street. Because the reception is better. The reception, yes. Look never mind, can you open the front door for me? I can't open it. Thanks, I'm walking back to the gate now... hello? hello? [plod plod plod back again]

The door is still locked. But there is an interesting development as Mme D is now speaking to me from the other side the locked door. She says it's locked. I say I know it is. She says she can't open it. I say neither can I.

She asks me why I was trying to connect to the smart home security system by 4G since, standing in front of my own front door, it ought to be possible to connect to my own home Wi-Fi. Well yes, I thought that was odd too. I can't connect to my Wi-Fi.

I restart my phone. Mme D waits patiently three feet away on the other side of the door. There is no conversation.

Mme D tries launching the smart lock app but it is asking her if she minds installing an update first. Before I can blurt out "NO!" it's too late. Mme D's phone is already pummelling her with automatic system updates, Huawei warnings, GDPR nags, alt-right conspiracy theories, Fortean reports of frog-filled cloudbursts and a reminder that Amazon Slime Day is only 47 months ahead.

This could take a while. It begins to get dark.

Has the update completed? "Not yet," comes the reply. "Oh and it's getting dark," she adds, helpfully. "The lights don't work," Mme D observes. "Hang on..." [sound of padding feet into the distance and back again] "... neither does the fridge or anything else."

So basically there's no electricity. That would explain the lack of Wi-Fi and, of course, the associated lack of any smart home security system. Can't the lock be opened manually? Mme D reminds me that the smart home installer told us at the time that we had the "wrong type of lock" but we'd not understood what he meant and just assumed he was making idle conversation and so ignored him. Now we understand better: the wrong type of lock is one that cannot be opened when you have a power cut.

I ask Mme D if she'd mind checking whether the mains switch on the box hadn't flipped to OFF due to a power surge or something. Mme D asks if I'd mind doing that myself since the mains switch is next to the Linky, which is just outside the front door.

Yes, the all-encompassing ON-OFF switch that enables or disables electricity throughout our entire property is located in a skimpy metal cabinet that can be unlocked by absolutely anyone at any time using anything from a flat-headed screwdriver to nail scissors to a ring-pull from a can of lager.

Hang on, maybe I have a flat key somewhere to open the cabinet. Duly found, the key gives me access to the electricity meter and, sure enough, I can see the switch has flopped to the OFF position. I flick it back up.

I hear whirrings of stuff inside the house rebooting and Mme D turns on the porch light. A mere five minutes later, I have connected to my Wi-Fi. Just five minutes after that, my smart home system deigns to let me log in – that 8FA is a bugger when your fingers are cold – and I press the unlock button in the app.

And I'm in. Pausing only to re-lock the meter cabinet, I shuffle into my uber-secure home and dump my bags in the usual place.

My phone, of course.

Oh, it's just some flat key I found at the bottom of my backpack. I used it to open that crappy meter cabinet outside. Good job I had it, eh?

Alistair Dabbs is a freelance technology tart, juggling tech journalism, training and digital publishing. He does not really have a smart home security system. He has been put off from investing in such a thing by all the horror stories he has read about them. Admittedly, he wrote those stories. @alidabbs