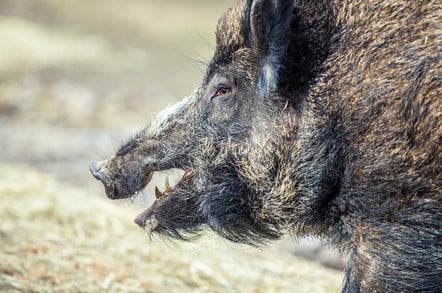 As if Italy's wild boar population wasn't enough of a problem for farmers while it's sober, some of the brutes have rooted out and destroyed a €20,000 stash of cocaine hidden in woodland of eastern Tuscany.

At least this was the claim made by four suspected drug traffickers who'd been wiretapped by cops, The Local reports.

The gang came on the police radar following the murder of a 21-year-old Albanian in the town of Sinalunga last year, which led to the discovery of a coke-pushing network between Siena and Arezzo, according to Toscana Media News.

Italian newspaper Il Tirreno said the drugs hailed from Perugia and were buried in jars in woodland near Montepulciano to be picked up and distributed in surrounding nightclubs.

The suspected dealers – three Albanians and an Italian – were reportedly able to sell 2kg of blow a month for €80 to €100 per gram between September 2018 and March 2019. However, the wiretap overheard a call in which one complained that a wild boar had sniffed out the stash and strewn the contents across the forest floor.

Bees on cocaine: The facts

The tap led to two being jailed and two placed under house arrest. It's not clear what happened to the hog or hogs responsible, but we like to imagine they were off their ever-loving tits and rampaged through nearby farmland, closing the night with a marathon session of piglet-making to wake up with a monstrous headache and wondering why that truffle in particular was so moreish.

The destruction caused by the country's feral pigs is a hot topic, not least among concerned drug dealers. Earlier this month, the Coldiretti – Italy's largest farmers' association – led protests in Rome against government inertia in controlling the population.

Heck, even in the UK's Forest of Dean, where a reintroduced population runs amok, extra hunters have been enlisted to keep numbers around 400. The Coldiretti estimates that 2 million wild boar roam the peninsula unchecked, "destroying crops, killing livestock and besieging stables", according to The Guardian.

Wild boar have a heightened sense of smell and have been used in drug detection before, so it's no wonder one of them found the cocaine. Oddly enough, Brit boxer Tyson Fury blamed a failed drugs test on his penchant for eating one entire boar a week, claiming it was the meat that was contaminated.

One would hope he's changed supplier by now. ®