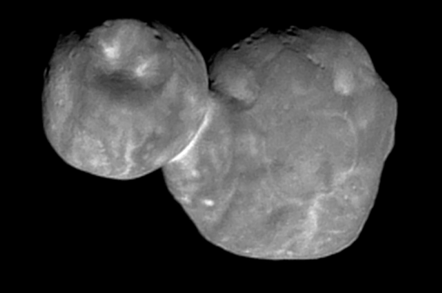 NASA has given the Kuiper belt object nicknamed Ultima Thule the official name Arrokoth, which means sky in the Native American Powhatan-Algonquian language.

Before the rock was known as Ultima Thule or Arrokoth, it was dubbed the rather tongue-twisting 486958 2014 MU69.

After NASA’s New Horizons spacecraft arrived at the outer reaches of the Solar System, and had a good butchers at Pluto, scientists pointed the gizmo at 2014 MU69. In late 2017, they launched a campaign to nickname the thing. Fast forward to March 2018, and NASA settled on Ultima Thule (pronounced thoo-lee), a term found in ancient literature understood to mean “beyond the borders of the known world.”

That may sound all mystical and cool, however, at the time, it was noted that the name was used by Germany's Nazi party and today's alt-right thugs. Thule, a legendary island north of Europe, was at some point appropriated as some kind of utopian origin land of the Aryan race.

NASA did not confirm nor deny it had switched from Ultima Thule to Arrokoth to avoid controversy. Instead, a spokesperson stressed to The Register on Wednesday that Ultima Thule was simply an unofficial nickname, and now the rock has an official name:

“It is inaccurate to state that it was renamed as Ultima Thule, [that] was never the official name of 2104 MU69. Rather, it served as a nickname until the New Horizons Discovery Team chose Arrokoth as the official name, which was submitted to and approved by the International Astronomical Union."

That union is the official internationally recognized authority for naming objects in space, and it accepted the Arrokoth earlier this month, we're told.

“The name Arrokoth reflects the inspiration of looking to the skies, and wondering about the stars and worlds beyond our own," said Alan Stern, the New Horizons principal investigator based at the Southwest Research Institute. "That desire to learn is at the heart of the New Horizons mission, and we're honored to join with the Powhatan community and the people of Maryland in this celebration of discovery."

NASA said it obtained consent from Powhatan Tribal elders to use the word. “We graciously accept this gift from the Powhatan people," said Lori Glaze, director of NASA's Planetary Science Division.

"Bestowing the name Arrokoth signifies the strength and endurance of the indigenous Algonquian people of the Chesapeake region. Their heritage continues to be a guiding light for all who search for meaning and understanding of the origins of the universe and the celestial connection of humanity."

New Horizons successfully approached Arrokoth earlier this year in January, and sent back snaps of the chicken drumstick-shaped object.

In other space rock related news: JAXA, Japan’s space agency, has confirmed Hayabusa 2 has left the Ryugu asteroid and is now on its way back to Earth. Scientists are now eagerly awaiting the souvenir gift of dust scraped from Ryugu’s surface expected to arrive some time in December 2020. ®