Wait, wait, wait... there is good news: It has a Spotify app. What a winner 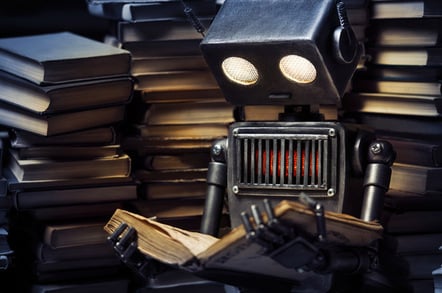 Analysis Augmented reality hype-merchant Magic Leap has had to whip out its begging cap, sorry, sorry, its once-in-a-lifetime investment chest again for venture capitalists to top up with with millions of dollars.

Having burned through $2.6bn – that's billion – on its way to producing an AR headset that has so many limitations it seemingly has zero chance of becoming a consumer device, the upstart has announced it is now part way through series E funding.

That's just a Silicon Valley way of saying it's on a fifth formal round of begging to banks and venture capitalists to help it keep going before the biz finally starts making money. In reality, it is the manufacturer's eighth funding round, with the most recent being a cash influx of $280m in April this year. That money appears to be running out, or just simply not enough, just six months later.

And while things were already looking perilous for the company that continues to promise the Earth yet has persistently underwhelmed, failed to hit deadlines and often flat-out spewed BS, there is some troubling news that has just emerged.

In August, Magic Leap assigned [PDF] its patents to monster bank JP Morgan Chase as collateral. JP Morgan Chase was part of Magic Leap's round of Series D funding in 2017 that brought in $1bn and was a critical anchor partner: someone that gives others confidence that the company is going somewhere.

But Magic Leap has, so far, failed to come good on its grand promises, and demand for its $2,295 headset – finally released in April this year after eight years of development and four years of broken promises – had seemingly been almost non-existent.

That means unless something extraordinary happens and Magic Leap's engineers finally crack the numerous technical problems they face – most significant of which is tracking – then arguably the only thing of real value in the company is its patents.

Over the years, Magic Leap has managed to hire some top engineers who have developed some great technology that will most likely be included in future AR headsets. And they have patented it. So even if Magic Leap's products die and the organization falls over, it still has its intellectual property that other contenders will likely have to license to bring their own products to market.

Which is what makes it all the more alarming that the business has assigned the right to its most valuable assets to JP Morgan Chase. It is speculated – speculated, we stress – the patents were put up as some sort of loan collateral.

"Like a mortgage on a home, Magic Leap still has control of the patents similar to how a person owns their home with a mortgage," display tech guru and patent inventor Karl Guttag espoused earlier this week. "But like a mortgage, if Magic Leap was to not fulfill the terms of the loan contract, such as paying back the loan, then JP Morgan Chase would own the patents. The exact terms of the contract between JP Morgan and Magic Leap are not known, but in order to perfect JP Morgan’s position as first in line to get the patents, they needed to register it with the US Patent Office."

Effectively, in your humble vulture's view, Magic Leap is drinking in the last chance saloon. If it's true that the patents are collateral, unless it can crack the technology before this next round of money dries up, JP Morgan Chase could very well end up with the patents as a commiseration prize.

And all that might explain why Magic Leap is aggressively targeting ex-employee Chi Xu, who worked at the company between 2015 and 2016, before setting up his own AR company called Nreal in 2017. Nreal's product wasn't that great, though in February this year, Nreal did something potentially ruinous for Magic Leap: Nreal connected its own AR device to an Android phone.

We'll explain. Magic Leap's AR headset relies on its own custom computer that exists as a large disc you attach to your waist. It massively increases the cost of the product and creates a walled garden – you must use its software and computer to control the goggles – that Magic Leap has persuaded itself is a good thing (we can control the market!) before realizing that in reality it is an Achilles heel.

What Nreal does is use a smartphone's processing power to drive the headset, and as a result, the AR kit is a third of the price, around $600. This low-price rival is a mortal threat to Magic Leap, and so Magic Leap has turned to its only advantage – cash – and in June set its lawyers on Xu and Nreal, claiming [PDF] that he is "exploiting Magic Leap's confidential and proprietary information to unfairly compete in the development of wearable spatial computing glasses and other related technology."

So Magic Leap has money issues again without having solved its biggest technical problems, it has assigned its most valuable assets to a bank that will walk away with them at this rate, and it is suing a former employee because he has a developed a cheaper version of the same kind of AR product by having the good sense to attach it to a smartphone.

It's usually at this point that Magic Leap CEO Rony Abovitz appears on a stage somewhere alongside a famous sportsman and waxes lyrical about how Magic Leap is going to change the world before giving a misleading demo.

But it is all too possible that people may finally have grown tired of Abovitz dog-and-pony show now that the actual product is on the market and no one seems particularly interested in it. The fierce secrecy around Magic Leap only worked in building hype because people, especially Silicon Valley types, love the big reveal.

Well, it finally came and was greeted by a universal "meh."

So what does Magic Leap have up its sleeve? A Spotify app! That's right, the techno-specs have their own native Spotify app, and the biz has even paid a YouTuber to talk about how great it is.

The truth, however, is that not only is it not great but it highlights the limitations to Magic Leap's headset. Spotify has a philosophy of working with pretty much anyone that wants to add its service, and it has paid off for the music giant. But what can you do with the Magic Leap Spotify app?

Well, you can select music and play it. As you can with any other Spotify app. And where does that music come out? The Magic Leap external speakers on the headset.

So now you have a choice: you can choose your music on your phone with your own headphones (or sound system) and have it play within seconds, or you can don Magic Leap’s $2,000 headset, attach its disc computer to your waist, start it up, pick up the separate control, select the music you want and then listen to it over the headset’s tiny speakers.

Literally no one is going to do this. A Spotify app on an AR headset? Yep, that is exactly how desperate Magic Leap is right now. ®

Magic Leap never responds to our requests for comment. However, it told the showbiz press:

"Magic Leap is in the midst of a significant financing round, which will become our series E when complete. We have already closed a major portion of this round, some as equity and some as convertible debt that will become equity when the round is complete. The participants in this round include existing investors, new investors, and strategic partners."

A statement about as useful as its space-age goggles.

MWC We'd like to Azure you, mixed reality has a business application