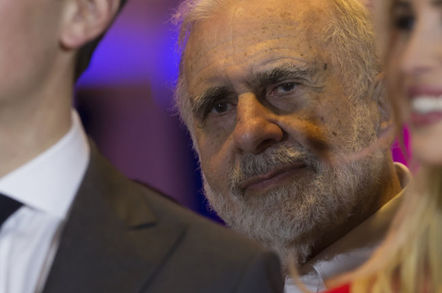 It was only a matter of time before Carl Icahn got involved in the developing story that is HP and Xerox's marriage. The IT industry's biggest, baddest corporate raider is using his $1.2bn stake in HP to push for nuptials.

At least this is the view today expressed by the Wall Street Journal, which was told by the activist investor, who already owns a 10.6 per cent stockholding in Xerox, that he's also got a 4.24 per cent chunk of HP stock.

For those who have spent the past few weeks taking a break from the modern world, Xerox last week made a $22 per share bid for HP that values the office giant at $33bn. The offer includes $17bn in cash and 0.137 Xerox shares for each HP share.

Icahn can smell money, and reckons there are cost savings to be made by the two organisations coming together, savings said to be more than $2bn, and that a richer printer portfolio will emerge from the merger: HP has strength in printers and Xerox in copiers.

"I think a combination is a no-brainer," Icahn told the paper, "I believe very strongly in the synergies," going on to say: "There will probably be a choice between cash and stock and I would much rather than have the stock, assuming there's a good management team."

HP was riding high since it split with its parent organisation in 2015 until this year (Q1, Q2 and Q3), when the general downturn in printing, coupled with competition from cloned or remanufactured print supplies, dented profits. HP has since waved bye to senior execs at a regional level in a global restructure, and is reducing the workforce by 9,000 to cut overheads and save $1bn a year in expenses.

Similarly, Xerox is also in cuts mode with its chief exec, John Visentin, to reduce running costs by $640m a year. Icahn and another big shareholder, Darwin Season, thwarted Xerox's planned merger with Fujifilm Holdings then called for Visentin to be put in charge.

Icahn claimed it was Vistentin that thought of Xerox approaching HP and worked with advisors to take the idea to the Xerox board early this month.

He said his own team started to analyse HP in February after its weak Q1 financials resulted in a 17 per cent share price crash as its supply woes first surfaced. Wall Street is also worried that HP may face pressures from next year as the business PC refresh cycle comes to an end. HP would argue it has more in its armoury to keep sales ticking along.

HP has significant cash flow and a small amount of debt, meaning the stock could be undervalued and may benefit from Icahn's brand of activism, the man said.

"I've found over the years that these types of companies that are in shrinking industries tend to decline much more slowly than many markets participants may predict, while continuing to generate substantial amounts of cash," said Icahn.

The investor said he stopped buying HP stock by mid-August before his stockholding reached 5 per cent, and he would have been forced to disclose that he was behind the purchases.

The Register has asked HP and Xerox for comment. ®