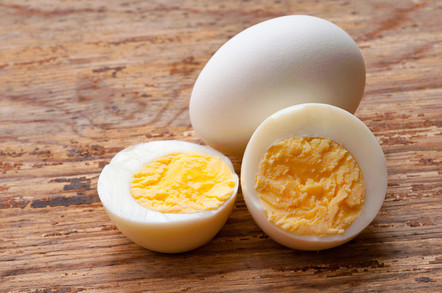 Eating on the train is no yolk. One woman felt so strongly about it, she's now nursing a £1,500 fine after eggsploding with rage at a fellow commuter for gobbling a hard-boiled pre-chicken on the service from Chelmsford to London Liverpool Street.

Some prefer a modest oat bar washed down with a Costa coffee when breaking fast on the go, but on that fateful day – 6 September – Erika Stoter opened her Tupperware to tuck into the unorthodox meal.

Bear in mind that this was a 6am service. What a start to the day.

Stoter told Blackfriars Crown Court, as reported in the Evening Standard, that fellow passenger Samantha Mead, 50, became "agitated" when she began to eat, giving her the old stink eye. Her brekkie, Stoter admitted, did stink a bit too.

Things eggscalated after the train had stopped at Stratford – almost home free. Mead moved to the door to escape the stench, continuing to give Stoter a "bad face". To which Stoter responded with a shrug.

Thin-shelled Mead cracked, and moved "quickly and aggressively" towards Stoter and "leaned into her face".

Mead asked Stoter, originally from South America, if she spoke English. Stay classy, Middle England. Stoter told the court: "I said no because I was scared and confused. I thought she would stop... she said, 'You are disgusting'."

The court heard that Mead told her: "You don't know who I am, be careful. Do you want to go outside?" Though we're not sure about the logistics of that because the train was still moving at the time.

Stoter retorted: "Don't you think you are quite old to be doing these kind of things?"

She admitted that Mead wasn't the only traveller to complain about the smell, and Stoter said she had closed her Tupperware in an attempt to contain the odour. As to why she was eating boiled eggs on a busy commuter service at the crack of dawn, Stoter told the jury: "I have to eat at that time because of my diet."

Stoter reported the incident to police after alighting at Liverpool Street, but Mead had left the station. She was taken in for questioning on 10 September when Stoter saw her again on the same train.

In her defence, Mead said she was taking medication for an illness and that the smell made her feel sick. She also claimed she had aimed "disgusting" at the food rather than Stoter and denied that she lost her temper, but was "having my own private hell".

Mead, from Manningtree in Essex, was convicted of intentionally causing harassment, alarm or distress and on Friday was fined £750 and ordered to pay £750 in compensation.

Currently, eating on a train isn't illegal in the UK. We'd be lost if we couldn't pick up a dirty curry to enjoy on the train back to Chelmsford – aka the Vomit Comet – after a night out with Vulture Central, fellow passengers be damned. But harrassing people is.

In some parts of the world, however, simply having a snack on the platform is a heinous crime. Just ask this poor African American chap who was reportedly arrested for eating a sandwich while waiting for a Bay Area Rapid Transit (BART) service in San Francisco. He was actually taken in for resisting arrest. One gem from the altercation is as follows:

"For eating a fucking sandwich?"

To get a sense of the desperation Mead might have felt, we opened the floor to resident grumpy old man Richard Speed. He provided us with this untempered brain fart: "My commute to Vulture Central is frequently blighted by people opening up their stench boxes or unwrapping some greasy rancidity emblazoned with an 'M'.

"Since the windows of trains can no longer be opened by we untrustworthy passengers, the entire carriage is forced to share the fragrance. Frankly, it is worse than a fart.

"Naturally, being British, 'rage' is normally a tut, a sympathetic glance between those suffering the selfishness of others or maybe an eye-roll.

"Proper rage is reserved for those unpeeling a kebab on the London Underground. A crime perhaps worse than, you know, speaking to each other."

OK boomer. It's almost time for your nap. ®

Good luck ever finding this guy again after, dare we say, his life jumped the tracks