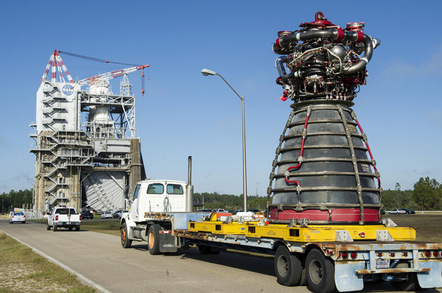 An RS-25 flight engine being trucked to the test stand back in 2016. Pic: NASA/SSC

Roundup While astronomers winced and Musk's rocketeers cheered the deployment of another 60 Starlink satellites into Earth orbit, there was plenty of other action in the rocket-bothering world.

Following the pad abort test of the CST-100 Starliner capsule, which both Boeing and NASA insist was a success, the aviation giant has revealed the cause of the failed parachute deployment. In a statement, the company pointed to "a lack of a secure connection between pilot and main parachute on the third parachute."

The purpose of the pilot 'chute is to pull out the main parachute, so botching the connection between the two means the bigger brother may not deploy, as – embarrassingly – happened during Boeing's test. The red faces were doubtless compounded by the fact that the Commercial Crew team were able to "quickly identify the cause" just by looking at the close-out imagery taken just before the test, showing a pin wasn't inserted properly through a loop on the pilot 'chute. This is something one would have expected an on-the-ball quality assurance team to have caught ahead of time.

For its part, NASA said that Boeing would be "validating that its processes were followed correctly on its Orbital Flight Test vehicle."

Of course, redundancies in the system meant the capsule descended safely on just two parachutes and had there been a crew onboard, the 'nauts would have been fine. The test, trumpeted Boeing, actually validated that redundancy and highlighted "the robust and redundant safety features" of Starliner.

So that's alright then.

The gang are still aiming to send the CST-100 on an uncrewed orbital test flight on 17 Dec before crowbarring humans into the thing in the early part of 2020.

Artemis I receives its engines

It was a bittersweet moment for Shuttle-huggers last week as all four RS-25 engines were fitted to the core stage of NASA's Space Launch System (SLS). The first two engines were structurally mated in October and the final two went in a day apart, with the last being fitted on 6 November.

We are a step closer to landing the American astronauts on the Moon by 2024. With the final engine attached, technicians are now working inside the rocket to make all the final connections and complete assembly on the SLS core stage for Artemis I. MORE >>https://t.co/fxDrvhOCBw pic.twitter.com/oJ80xmC74X

To be fair, one would have expected the fitting of the engines to be relatively straightforward, since engineers got very adept at swapping the things out during the Shuttle era. The RS-25 is, after all, a Space Shuttle Main Engine repurposed from reusability to being unceremoniously dumped in the ocean after a SLS launch.

There is certainly a whiff of Apollo about the whole endeavour, as NASA boasted that the core stage would put out more than two million of pounds of thrust and was the largest built by the agency since the days of the Saturn V. That beast was, of course, hugely expensive and entirely unsustainable in its final form.

Once integration of propulsion and electrical systems are complete, engineers will conduct a functionality test of the full avionics suite ahead of sticking the thing on a test stand and firing it up.

The cash will be spent on ground support equipment and mission planning and, according to a statement, will help "secure the first satellite launch from Spaceport Cornwall."

Spaceport Cornwall reckons that getting launches running from the site "could create 150 immediate jobs" with more created by businesses supporting the endeavour.

For its part, Virgin Orbit has made much of the flexibility of its approach. Since its LauncherOne rocket is dropped from a modified Boeing 747, the company can operate from pretty much anywhere its jumbo can get to, so long as the paperwork is in the place and the airport has some rocket processing capabilities.

Virgin Orbit is also expected to contribute £2.5m of its own money to the project.

The UK government is additionally spanking £31.5m on vertical launch services at spaceport in Sutherland, Scotland.

Will the last American on the Space Station please turn off the lights?

NASA wheeled out the expedition 62/63 crew last week to discuss the trio's launch to the International Space Station (ISS) in April 2020. The mission looks set to be an interesting one, although possibly not for the reasons NASA might have hoped for.

As commercial crew providers SpaceX and Boeing struggle with schedules, there is a very real possibility that NASA astronaut, Chris Cassidy, could be the last American to ride a Soyuz booster to the ISS. And when the expedition 61/62 crew, consisting of Oleg Skripochka, Jessica Meir and Drew Morgan, depart Cassidy and his two Roscosmos crewmates will be left alone to tend the ISS for as long as half a year.

NASA really does not want to have splash the cash on more of the increasingly expensive Soyuz seats to enable its astronauts to visit the ISS.

Remarking that "with luck we'll have Commercial Crew" Cassidy accepted that there was a real chance that he'd be spending six months as the sole US crew-member.

Having just three crew on the ISS will make getting science done a tad tricky since just maintaining the outpost burns through crew time. And performing spacewalks will present its own challenges.

While Cassidy doubted that any spacewalks would be scheduled, "if it's an emergency or a situation that requires repair then we're prepared and ready to go."

So, Boeing and SpaceX, no pressure then, eh? ®