From a time before: 'This will do something awful. Are you sure? (Y/N)' 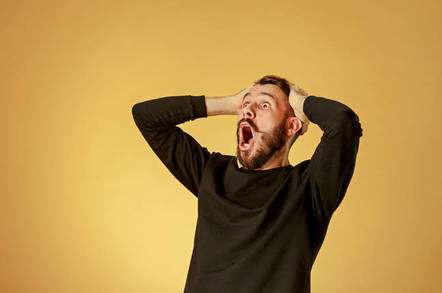 Who, Me? Welcome back to Who, Me?, The Register's weekly dip into the suspiciously bulging mailbag of reader confessions.

Today's tale of mainframe madness comes roaring in from the 1970s, courtesy of a reader whom we shall call "Jed".

Jed was a computer operator at what was then a large automotive and aerospace component manufacturer. As befits a high-tech industry, the company had a state-of-the-art data centre, in which lurked a mighty IBM System/370 Model 158.

The specs were eye-popping for the time, as Jed explained: "We had about 3.2GB disk storage and about eight tape drives, all the size of a fridge." 1MB storage supported "about 25 IMS terminals and about 50 TSO terminals dotted about the Midlands, robotic machine tools, plus constant batch and application development work."

"Things worked more efficiently back then," he added.

Other hardware enjoyed by users included screens, keyboards and light pens. "Apart from more colours, higher screen resolution and a mouse, not much different to today."

Since few could afford such power to be at their personal disposal, users would often borrow a bit of time on the mainframe out of hours to do their own work. One morning, by around 6am, a friend ("even operators had friends") of Jed's who was using the computer decided he didn't need any printed output.

"And then the fun started."

Jobs sat in a work queue. Deleting a job was a simple case of typing something along the lines of "£PJ12345", according to Jed, where 12345 was the desired victim. A neat feature of the software, HASP, was that a range could be specified to save laboriously entering numbers.

As each command was processed, it would be displayed on the screen and spat out on the high-speed printer.

"We had all done something similar," Jed recalled.

Things took a dramatic turn for the worse as soon as the purge command was run.

Pat yourself on the back if you spotted the not-so-deliberate mistake. A rogue hyphen had crept in.

The Stop button on the computer console was hit, but not before a few hundred jobs had met an untimely end.

And it wasn't funny. The issue was rapidly escalated; the computer was stopped and users were starting to complain. IBM was contacted – how could this evil command, which was set to wipe the night's work, be stopped?

The answer was not good: "Even a reboot (IPL in those days) would not fix the problem."

The command had been recorded and would resume as soon the computer was restarted. There was no going back.

"So the Stop button was released and the noise restarted. To more cries of 'It's not 'kin funny', a mix of managers and operators watched all the overnight work disappear."

Hearteningly, Jed's friend did not cop all the flack for the incident from the data centre manager. In fact, most of the rage was directed at Big Blue, "who had allowed a simple mis-type… to have such big consequences".

Although until a fix was implemented to treat a double hyphen as invalid syntax, the team were warned to be very, very careful about which commands were typed.

Jed's friend went on to become a System Programmer, while Jed himself moved into application and database design and then architecture.

"But I still smile when I remember when a hyphen became a minus."

Ever accidentally set off a command of mass destruction and found yourself unable to stop the havoc? Typed a thing in jest, expecting an "Are You Sure?" but instead found yourself measuring the blast radius? You know you have, and it is time to confess all in an email to Who, Me?