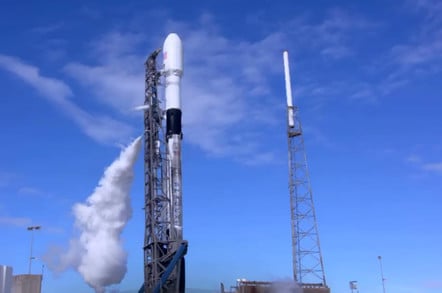 The first upgraded batch of Starlink satellites were launched by SpaceX today, marking the fourth reuse of a Falcon 9 booster and the first of a payload fairing.

While there is every possibility the booster could be used again, the fairing halves met a watery end after the company elected to cancel a further recovery attempt.

The Register was there to watch the Falcon 9 head into the Florida sky as the rocket left Cape Canaveral Air Force Station's Space Launch Complex 40 (SLC-40) at 14:56 UTC.

While it's no Space Shuttle, the power of the 9 Merlin engines was enough to shake the ground and light up the horizon. 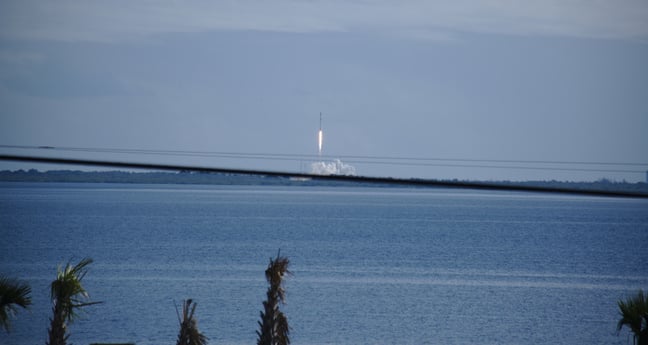 This snap was taken by Alan Page, who had a better camera than this impoverished Reg hack (click to enlarge)

It is also a good deal cheaper and, it would appear, easier to reuse than the orbiter of old. And the noise still managed to ruffle a vulture feather or two as Musk's finest blasted into the atmosphere.

That booster had previously been used for the Iridium-7, SAOCOM-1A and Nusantara Satu missions. Reusing the rocket over and over again is a key part of SpaceX's business plan.

At just after the 2-minute-30-seconds mark, the first stage cut off and began its descent to a drone ship stationed out in the Atlantic – sadly a long way out of sight; a return to land was not possible this time around. The second stage then sent the payload of 60 Starlink satellites to the desired altitude of approximately 280km.

The satellites themselves will undergo checkouts by engineers before using their own onboard ion thrusters to head to their required orbits. Since the launch of the first batch of the broadband birds, back in May, SpaceX engineers have upgraded things to maximise the use of both the Ka and Ku bands.

The enhancements have meant that the satellites have bloated out a little, and SpaceX declared that the payload of 60 was the "heaviest" to date.

Worryingly, those upgrades do not seem to have done much for their reliability as SpaceX also admitted that one of the Starlink satellites on the launch was looking a little iffy before the rocket had even left the pad.

Team is go for launch of 60 Starlink sats tomorrow—heaviest payload to date, first re-flight of a fairing, and first Falcon 9 to fly a fourth mission. Watching 1 sat that may not orbit raise; if not, 100% of its components will quickly burn up in Earth’s atmosphere pic.twitter.com/OrI8L0ntFK

That will worry scientists wringing hands about the impact constellations like those planned by SpaceX will have on the sky and neighbouring spacecraft. ESA has already had to dodge one Starlink satellite after Musk's rocketeers failed to pick up the phone.

If only they had some sort of communications network.

Assuming the failure rate isn't too alarming, the gang plans to bring service to the US and Canada after six launches, with global internet coverage complete following 24 launches. Whether Earth-dwellers like it or not.

Indeed, scientists have expressed alarm at the prospect of thousands of the things orbiting the planet. At a recent ESTEC event, Mark McCaughrean, senior advisor for Science & Exploration at the European Space Agency, asked attendees to ponder who actually "owned" the night sky amid plans by billionaires to spray Earth orbit with tens of thousands of satellites.

While a Falcon 9 launch and landing is a hugely impressive technical feat, those worries about the impact of Starlink (and its rivals) have not gone away.

As for McCaughrean, he elected to express his opinion via mime.

Could work: here's me on Starlink 😎 pic.twitter.com/mYTPBnD3ag