Taking a leaf from nature 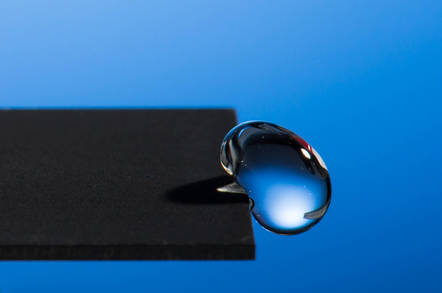 An image of a water droplet bouncing off a hydrophobic metal surface etched with lasers. Image credit: J. Adam Fenster / University of Rochester

Video Scientists have fashioned an unsinkable type of metal by etching the surface with lasers, creating an unusual “superhydrophobic” layer.

The new research, published this week in ACS Applied Materials & Interfaces, was inspired by diving bell spiders and fire ant assemblies. Both types of creepy crawlies are able to travel across water by trapping air bubbles around their bodies, making the surface of their limbs hydrophobic, meaning they repel water molecules, and this enables the animals to float across ponds.

Researchers from the University of Rochester in New York took the same idea and applied it to disks of aluminum to create a superhydrophobic structure that doesn't sink. First, the metallic pieces are etched with quick laser zaps lasting a few femtoseconds on one side. This produces tiny crevices to trap air bubbles.

After the object is dropped in water it stays afloat, and even when it is pushed down and submerged when let go it pops right back up to the surface. You can watch a video demo below.

The small distance between both aluminum plates holds enough air to form a bubble that keeps it buoyant, and the superhydrophobic surface pattern prevents water from entering the gap so it floats even after it has been submerged.

Even when the surface of the structure has been scratched or damaged with holes, it doesn’t seem to sink. But there’s a limit to how far that property can be pushed. If the object remains underwater for longer than two months, its superhydrophobic surface begins to erode, allowing water into the air gap.

Nevertheless, the team hopes that the etching technique can be used on a variety of materials to eventually create unsinkable boats capable of staying afloat despite being damaged.

“The potential use of the [superhydrophobic] floating metallic assembly ranges from floating devices and electronic equipment protection, to highly floatable ships and vessels,” according to the paper’s abstract. ®

It's not us, it's you: Boffins ditch supercomputers in lust for new materials

NASA sets fire to stuff in SPAAACE. On purpose. Because science