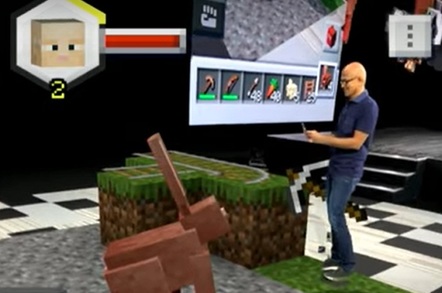 Is that a pickaxe in your pocket, or are you just pleased about the financials?

"Tech intensity" was the buzzphrase of the week, defined by Nadella in his keynote as (Tech adoption x Tech capability ) ^ Trust.

No, we're not entirely sure what that meant either and it set the stage for a week of announcements of products that did not always feel completely baked.

To his credit, Nadella did veer off from his usual dry presentation style with a slightly toe-curling bit of comedy as Microsoft attempted to squeeze the last drops of credibility from its recent Stranger Things tie-in with a video that saw the CEO shooing off a monster from the Netflix series.

"Satya, you saved me," uttered the game. We doubt many Windows Phone, Microsoft Band or Cortana speaker users would say the same.

It might have been different had that monster been Google's Anthos as the keynote paused to allow a brief look at Azure Arc, Microsoft's crack at getting a very limited set of Azure services to places that are not its own cloud or custom Azure Stack hardware.

While initially impressive, the application of a fingernail is enough to remove the glossy veneer and reveal that the company still has a bit to do if it truly intends to roll out its Azure tanks onto other people's clouds.

Microsoft's cloud services were unsurprisingly a focus of both Nadella's keynote and Ignite itself, although a visitor wandering around the company's conference centre booths would have found plenty of attendees gathered around the Windows Insider area hidden at the back, rather than milling around the swish Microsoft 365 and Azure spaces set front and centre.

We do suspect, however, that this might have something to do with the ninja-cat plush toy swag on offer and coffee machine lurking in the corner as much as a lingering affection for Microsoft's legacy OS.

And the keynote? After a brief foray into Future World with etched-glass storage in the form of the firm's Project Silica, which included a looping video showing the glass slab containing a Superman movie – hopefully Donner rather than Snyder – being variously boiled and microwaved but, strangely, not smacked with a Surface Pro 7, Nadella leapt into the developer side of the business and the Power Platform.

Choose Your Own Adventure

Microsoft has built development tools since its earliest days and, while coders were treated to a preview of Visual Studio Online this week, Nadella was keen to plug the Power Suite – Power BI, Apps, Automate and Virtual Agent, all of which are targeted at users not so immersed in the languages of the day.

The CEO was keen to show off bots that could be created without much in the way of code using the Power Virtual Agent service thanks to the company's AI. To our cynical eye, the process looked more like a Steve Jackson-esque Choose-Your-Own-Adventure book in digital form rather than any magical silicon smarts.

To be fair, a later demonstration showed the tech working with a trained machine-learning model to spot windscreen wipers, but we can't help but worry that sometimes the AI moniker is tossed around a little too liberally by Microsoft and others.

Old hands would have been taken aback to see an appearance of a Win32 app during Nadella's keynote, showing how the clunkiness of yesteryear can be hidden behind the new and shiny of the Power Platform. "The new Microsoft," Jared Spataro, corporate veep for Microsoft 365, told us later, "is a very pragmatic Microsoft" as the company continues to grapple with legacy apps and platforms.

The future, however, is the cloud and services as the company previewed natural languages services for Excel, Compliance services and automatically generated corporate knowledgebases, easier-to-query data warehouses with Azure Synapse and, at last, Private Channels for Teams.

Nadella ended his keynote with a vaguely awkward game of Minecraft Earth aimed at demonstrating once again the company's Azure-powered AR and Spatial Anchor smarts "to turn the real world into a playing field".

We're pretty sure the occasional snort-worthy placement of blocky carrots and pickaxes was entirely unintentional. ®

Tech preview due out this month

Honey, I shrunk the Windows footprint

Microsoft explains how it will fit Windows 10 into cheaposlabs, maybe without bloatware

WPC 2012 As with Yammer, Redmond is buying friends