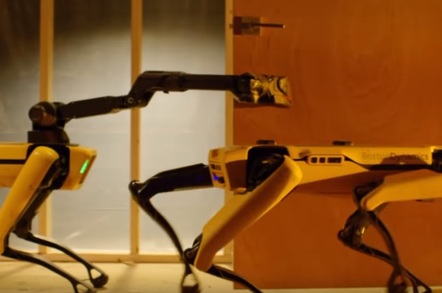 Marc Raiberts, chief executive of Boston Dynamics, has admitted tipping a toddler in his quest to probe how humans balance.

Raiberts told the BBC: "I have video of pushing on my daughter when she was one year old, knocking her over, getting some grief. She was teetering and tottering and learning to balance and I just wanted to see what would happen. But we're still good pals."

MIT graduate and professor Raibert started the company in 1992.

He has previously poo-pooed fears raised by his firm's robotic creations. To be fair, a man who films himself knocking over toddlers clearly has little to fear from the moral vacuum of our Terminator-filled future.

There are many excellent Boston Dynamics videos on YouTube, but perhaps this one of a man harrassing an innocent dogbot trying to get through a door is the most illuminating about the company's culture. The firm, which has surely made more from its admittedly brilliant YouTube videos than actually selling its machines, is offering its latest robot, Spot, on a lease basis.

Raibert told the Beeb they've had thousands of enquiries about the beast.

Initially funded by US defence tech agency Darpa, Boston Dynamics was eventually sold off to Google parent company Alphabet. They too tired and the firm was flogged again, this time to SoftBank.

The original kit-carrying hound BiGDog was tested by US Marines but failed to win their hearts.

If Ms Raibert is feeling well enough to give her side of the story, we'd love to hear from her or her counsellor. ®

Ruse of the Machines

Who's the cat who won't cop out when there's danger all about? SoftBank. Damn right

Can't dance? That's no excuse. Let a robot do it for you at this 'forced exoskeleton rave'

Where else but San Francisco?