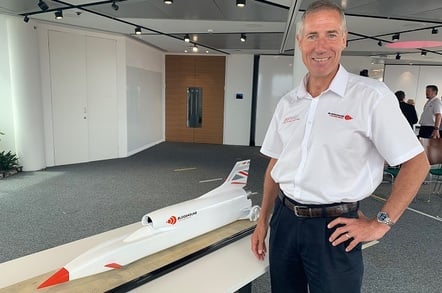 The Bloodhound land speed team hit 500mph (804kmph) yesterday but had to call off today's target of 550mph (885kmph) after an engine temperature warning.

The car reached 501mph (806kph) and successfully trialled the modified brake chutes. The team said there was noticeable yaw caused by a light cross-wind but the car remained controllable.

The BBC's man on the ground said watching the car today was like a rocket launch – as much about the sensations you feel as what you can see.

Bloodhound hit 481mph today before driver Andy Green lifted off the accelerator in response to an engine warning.

The car is powered by an EJ200 Eurofighter Typhoon jet engine and runs on precision-milled solid aluminium wheels. Much of the testing concerns how well the car can slow and stop via chutes, air brakes and wheel brakes.

Some 192 pressure sensors monitor the car and compare results with computational fluid dynamics models created at the University of Swansea. The results of this will help decide what rocket can be fitted to the car to push it over the 1,000mph (1,609 km/h) mark.

There's still some way to go for the rocket-powered car to reach that target. First the crew aims to break the current land speed record of 763mph before starting on the second phase, exceeding 1,000mph (1,609kmph).

Testing in Hakskeenpan, a salt pan in the Kalahari Desert, in South Africa's Northern Cape province, will continue on Monday.

The team also thanked the Northern Cape provincial government and members of the local Meir community, who removed 16,500 tonnes of rock from the 16km-long, 250m-wide track on the dry lake bed so the car could have a smooth surface to run on.

The project was rescued by Yorkshire businessman Ian Warhurst just before Christmas last year. Warhurst is keeping schtum about what the jaunt is costing him beyond saying he's up to seven figures so far.