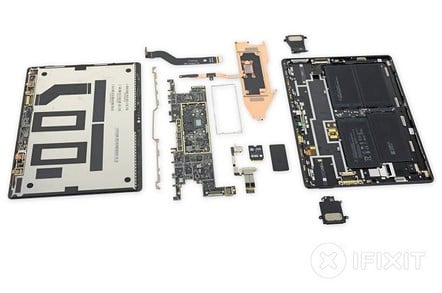 The Surface Pro X is in the hands of US users and the iFixit crew has already ripped into it. The repairability results might please Microsoft's legions of loyalists but give iPad fanbois pause for thought.

While the Surface Pro X components were on display for all to see at Microsoft's Ignite event, the chippery was securely hidden behind a do-not-touch sign. After successfully tearing apart Microsoft's new Surface Laptop 3 with surprisingly little difficulty, the team were keen to see if mere mortals could achieve similar levels of disassembly with the Pro X.

The answer is a guarded "Yes".

The Pro X tweaked the design that the Surface Pro line has followed for years, with slimmer bezels surrounding an easy-on-the-eye PixelSense display (a tad flimsy in our paws compared to its ancestors).

Like the Surface Laptop 3, Microsoft has made much of the removability of the SSD. Poking at the magnetically secured trapdoor did indeed reveal the SIM slot and that SSD, secured by a T3 screw. And yes, the SSD is interchangeable with the model used in the Laptop 3.

The good news train looked like it was coming to a screeching halt when the gang found no Laptop 3-esque screws holding the case together. However, with a simple bit of suction, they were able to lift the screen and easily peel the adhesive to get a closer look at the innards. While still not for the faint-hearted, the process is a good deal less destructive than that of previous Microsoft models.

With the screen removed, they could unscrew the heat sink (Torx screws again) and reveal the chippery within. As well as 8GB RAM and chips such as the Qualcomm RF transceiver and modem, the famed Microsoft SQ1 3.0GHz ARM processor was revealed.

Having spent some time with one of these devices, we have to admit that we'd probably have preferred something from Intel. We spoke to a number of people at Microsoft's Ignite event who complained about performance and battery life. The former is likely down to mismanaged expectations (32-bit Intel apps require emulation and 64-bit? Best not talk about it), the latter is more worrying since one of the selling points of the architecture is its power-sipping capabilities.

Of course, it is the power supply where things come unstuck in a very real sense. While Microsoft has taken huge strides in replaceability for the SSD, the iFixit team opted to leave the glued-in 38.2Wh battery well alone. They did, however, note that many of the surrounding components (such as the USB ports and Surface Connect port) were modular.

The team awarded the Surface Pro X a six out of ten for repairability, a colossal leap forward from previous Surface Pro devices. It seemed a little harsh, but that glued-in battery and suction-requiring screen dragged things down a little. The score was also considerably up on that of the iPad Pro, which has suffered multiple visits from the bad glue fairy.

While a question mark still hangs in our minds over the performance of the Surface Pro X, particularly considering the price of the slab, Microsoft has made great strides in repairability while still keeping the machine impressively slim.

Now, how about a swappable battery next time? ®