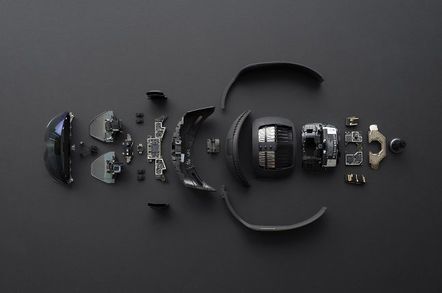 The wait is over. Microsoft has finally begun shipping its pricey augmented reality headgear to customers.

After some initial floundering, and some frankly odd home entertainment demonstrations, the HoloLens has carved itself a niche as a gizmo aimed at workers that need to keep their hands free.

While the first HoloLens carried the whiff of a prototype hurriedly booted into production as all around it seemed to be being cancelled, the latest version is a much more polished affair. We took a look last month and came away impressed with the potential, if not the price.

And goodness, the augmented reality eyewear is not cheap, at $3,500 for the device (or $99 per month for the development edition, $125 with Dynamics 365 Remote Assist), only the well-heeled enthusiast will be picking one up. For Enterprises it is a different matter, with customers such as CBRE regarding the thing as just another tool to assist engineers in the field.

Unlike traditional idiot goggles, the HoloLens projects images, or holograms, over the user's view. These can range from models a user can manipulate, to good old-fashioned windows-style dialogs.

Although HoloLens 2 has increased the field of view from its predecessor and also improved finger tracking, customers we spoke to were more excited about iris scanning (meaning poking at a virtual keyboard was no longer required for logging in) and the improved weight distribution.

The finger tracking has been achieved through the creation of a 3D model capable of representing all human hand shapes and motions, which is then virtually "fitted" to the wearer's hand. An eye tracking model allows the hardware to display holograms where users instinctively expect to see and interact with them.

While iris scans are performed locally by the device, avoiding private data heading into Microsoft's cloud, Azure naturally gets its time in the spotlight through services such as Azure Spatial Anchors, which allow holograms to persist for anyone with the right permissions and hardware to view.

That hardware needs to be a "mixed reality device", a classification that includes devices running iOS and Android. Microsoft's own Windows Mixed Reality headsets do not receive a call out. The unloved hardware has, alas, taken a decidedly Windows Phone-like dive in the Steam hardware charts – dropping from a peak of more than 11 per cent of the market down to nearer 5 per cent today.

Still, today is all about the HoloLens 2 which, after a lengthy wait following its February unveiling at MWC is finally ready to be delivered to eager customers.

Microsoft Technical Fellow Alex Kipman gushed over the device: "The power of this technology is it gives us the ability to displace space and time." He later tweeted that Enterprise customers would be at the front of the queue, in case you were in any doubt as to who it is aimed at.

Perhaps add "and the ability to displace a large chunk of cash from a customer's bank account" too, eh Alex? ®