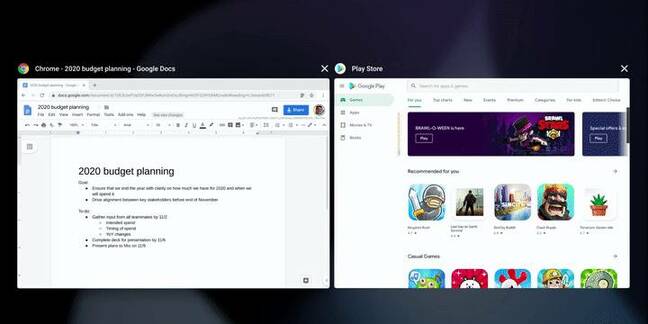 Google has added virtual desktops to its Chrome OS, used in Chromebooks, enabling users to create multiple workspaces and switch between them.

The virtual desktop feature is the biggest of several updates. Once the update is installed, a New Desk icon appears in the top right corner of the desktop. You can display virtual desktops full screen or side by side, and drag windows between desktops. These operations can be done with touch, mouse, trackpad or using keyboard shortcuts.

Virtual desktops have been available in Windows 10, macOS and Linux for some time so Google is catching up with these established operating systems.

Another new feature is the ability to right-click a phone number in Chrome and send it to an Android phone. This requires enabling sync between the Chrome browser on both devices.

A printer auto-detect feature means that compatible printers will automatically appear in a printer list without needing setup.

Google's Chrome OS has moved some distance from its original concept of a browser-based operating system when launched in 2011. The biggest changes were in 2016 when Android app support was added, and in 2018, when Linux application support appeared.

Chrome OS uses container technology to run Android and Linux in order to keep the operating system isolated and protected. With Microsoft taking a similar approach to running Win32 applications in Windows 10X, the gap between traditional PCs and Chromebooks is narrowing. You can even run some Windows applications on a Chromebook via the Wine compatibility layer.

Chromebooks have a small market versus traditional PCs. Chrome OS accounts for around 1.6 per cent of active operating systems, according to Statcounter, up from 1.2 per cent a year ago.

That said, Chromebook sales increased by double digits in the first quarter of 2019, according to Gartner, and the devices are particularly strong in education, where the combination of low price and a locked-down operating system is appealing. In early 2018 Google reported over 60 per cent market share in North America and over 30 per cent in the UK.

Less attractive is that a Chromebook is tightly bound to a Google login, raising concerns about privacy and data collection, and devices lose support automatically after a pre-defined period.

Still, with both Apple and Microsoft also increasingly insistent that you sign into their cloud accounts in order to use macOS or Windows 10, Google's approach is more absolute but, regrettably, no longer so distinctive. ®

Like life for a lot of us, Google's 2020 was going relatively fine until March hit. Ad sales nosedive, but yay for cloud and Chromebooks?

Does anything really matter when you have $100bn in the bank and pocketing nearly $7bn a quarter in profit?

Fifty bucks a year buys you management tools and support