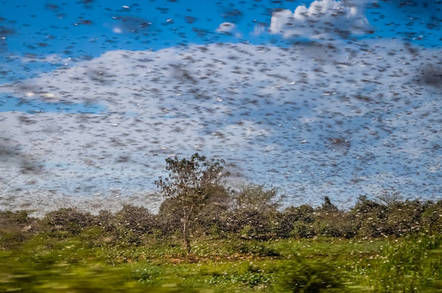 The British government has funded 18 anti-drone projects as part of its £2m push to stop a repeat of the Gatwick drone fiasco of 2018 – including a friendly drone swarm that will employ "peregrine falcon attack strategies" to down errant unmanned flying things.

Among the ideas that have scooped up to £800,000 each in funding for further development are plans to use machine learning to train cameras and other sensors on what a small drone looks like to aid early detection, as well as direction-finding of 4G and 5G-controlled drones.

In addition, one plan includes "low risk methods of stopping drones through novel electronic defeat or interceptor solutions". That is, jamming a rogue drone or flinging something into it to knock it out of the sky.

One wacky firm is working on a counter-drone swarm that will use "peregrine falcon attack strategies".

Funded by the Defence and Security Accelerator (DASA), as we reported in April, the competition is intended to bulk out the British state's ability to KO unwanted drones at will, whether they're being flown near the country's second-busiest airport, dropping drugs into prisons, flying over sports stadiums and livestreaming fixtures, or anything else naughty you can think of.

More seriously, the Armed Forces are increasingly worried about the threat from drones, as was demonstrated by the first ever landing of what the MoD now calls "aerial vehicle systems" aboard new aircraft carrier HMS Queen Elizabeth.

DASA's David Lugton said in a canned quote: "The threat from UAS [unmanned aerial systems] has evolved rapidly and we are seeing the use of hostile improvised UAS threats in overseas theatres of operation. There is a similar problem in the UK with the malicious or accidental use of drones becoming a security challenge at events, affecting critical infrastructure and public establishments; including prisons and major UK airports."

Around 90 bids were received for the DASA funding, said the organisation.

Among the successful bidders were defence multinationals BAE Systems, Northrop Grumman, Thales and MBDA, all with various similar proposals for radar and sensor systems intended to pick up small drones, as well as privatised British defence research establishment Qinetiq, which is working on an electromagnetic death ray "hard kill for disrupting the UAVs' on-board electronics".

Phase 2 of the competition begins next year, with the intent being to develop the 18 shortlisted ideas into something usable by military and police agencies alike. ®