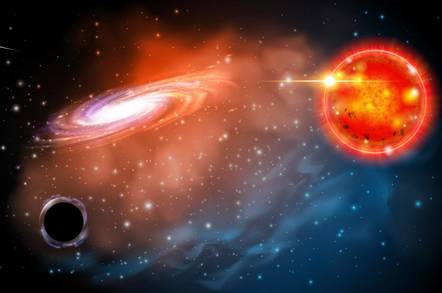 Astrophysicists may have discovered the smallest black hole yet – just 3.3 times the mass of our Sun – according to a new paper published in Science.

The object, described as a “massive unseen companion,” is locked in a binary system with a giant star codenamed 2MASS J05215658+4359220. A large team of academics discovered it when they studied the star’s orbital period and how its brightness changed over time. The results hinted that the star was paired up what could be a low-mass black hole.

“What we’ve done here is come up with a new way to search for black holes, but we’ve also potentially identified one of the first of a new class of low-mass black holes that astronomers hadn’t previously known about,” said Todd Thompson, lead author of the study and an astronomy professor at Ohio State Uni in America. “The masses of things tell us about their formation and evolution, and they tell us about their nature.”

Most black holes in binary systems are easy to detect: as they steal and gobble material from their companion stars, they accrete matter and release X-ray radiation. However, this so-called massive unseen companion doesn't fit that description, because it's too small, and it may therefore fall into another class of black hole – one that has yet to be confirmed.

This alternative class is known as “quiescent” black holes, since they don’t interact with any stars at all. In other words, the aforementioned tiny black hole may be one of these fabled quiescent black holes.

The researchers aren’t sure if the object is indeed a low-mass quiescent non-interacting black hole, we must stress, and there’s a chance it may be a massive neutron star. The estimated mass range falls in a so-called “mass gap” between neutron stars, the paper said.

Measured as 3.3 solar masses, it is slightly above the highest neutron star mass observed so far (2.1 solar masses) and lower than four solar masses – a theoretical lower limit for black hole formation, according to some models, the paper states.

Previous studies have shown that if a neutron star were above 2.5 times the mass of the Sun, it would collapse into a black hole. If the object in question is indeed a black hole then the researchers may have stumbled on a new type of black hole that hasn’t been seen before.

“We’re showing this hint that there is another population out there that we have yet to really probe in the search for black holes," said Thompson.