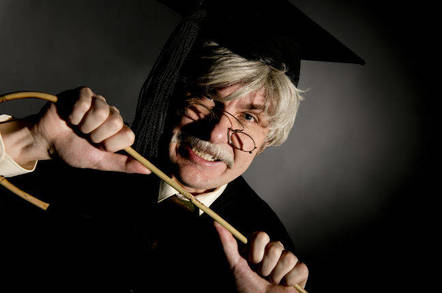 As if China weren't scary enough already (at least according to US prez Donald Trump), schoolkids in the country have been fitted with head-mounted gizmos to track their attention spans.

Citing state-run newspaper Beijing News, The Guardian reports that a trial on primary school-age pupils had to be scrapped after parents expressed fears that the devices would be used to control their children.

According to Beijing News, the data was collected on Xiaoshun Central Primary School's computer system and some was shared with parents.

Consent? They've heard of it.

So not only did the poor blighters face a tongue-lashing when their grades weren't up to scratch, their folks could be handed proof of them daydreaming.

A teacher at the school attempted to justify the invasive tech: "All we are doing is providing some assistance for the students to see how much they are paying attention. Because the data is transferred to the teacher, the students will concentrate more than usual, and we've indeed seen some improvements."

But it's not some Panopticon-like enforcement tech handed down from the state. The manufacturer is an American company called BrainCo, whose Instagram page is packed with pictures of kids and adults alike happily wearing the headbands.

The firm says its business is "brain-based solutions", whatever that means, but the potential for abuse is clear.

"Timmy, I can see you're thinking about Katy Perry and not long division. Come down to the front for a thrashing," etc. – though really it works more like a electroencephalogram (EEG), which is how medics monitor electrical activity in the brain.

A Chinese rep for BrainCo told the Beijing News the pupils wore the U-shaped devices twice a week for half an hour at a time for concentration training.

However, The Graun said that parents in China – like those anywhere else – are worried about their increasingly tech-addled sprogs and the implications of how their data might be used.

On 1 October, the Cyberspace Administration of China issued a regulation on protecting children's online data that requires "information to be encrypted, parental consent for collecting, transferring or using that information, and establishing user agreements".

Yang Zhangpeng, of partner firm Zhejiang BrainCo Technology, told the paper: "I'm not sure why the government has barred the use of the bands but it might be partly due to media pressure.

"Currently this is the only school in China that's been using them. The products are more widely used in the US but since Kong [Xiaoxian, BrainCo's co-founder] was once a student of that school, he decided to donate some of these headbands out of gratitude for his alma mater, with no ill intention.

"The data collected will only be stored at the school's database, not even the company's; nor do we share these data with parents; even teachers can only view the average numbers instead of those of specific individuals."

That's all fine then.

But there is a disturbing precedent for such "mind-reading" tech. Last year The Telegraph reported that Chinese workers were being fitted with "brain-reading devices that feed information about their moods to their employers" in a bid to drive "efficiency and productivity".

That scheme was government-sanctioned so it's not such a stretch to envisage a similar thing eventually being rolled out to schools across the country to rear the next generation of anti-American stormtroopers.

Perhaps Foxconn and Apple could learn a thing or two about crushing dissent among workers at its iPhone factory, which was recently outed for flouting Chinese labour laws. Trump must be shaking in his boots.

Meanwhile, the US president's grudge against the power rising in the east hasn't done the tech industry any favours, all under the pretext of comms kit from Huawei or ZTE representing a threat to national security.

Or maybe the ongoing trade tiff is merely a protectionist racket favouring US rival Cisco. It really makes you think. ®