Don't get too excited, though – we need quintillions of these things 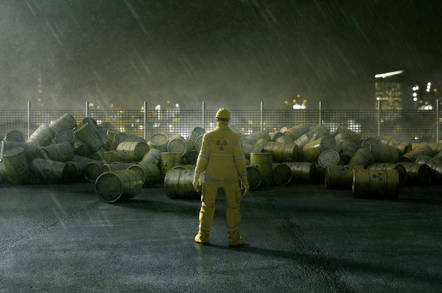 Video Scientists have built microscopic primitive robots that can swim in wastewater and remove radioactive uranium, in the hopes that they can one day be used to clean up nuclear spills for humans.

The team of researchers at the University of Chemistry and Technology and the Institute of Organic Chemistry and Biochemistry in Prague, Czech Republic, fabricated the self-propelled micro-bots out of tiny metal-organic frameworks consisting of magnetic ferroferric oxide, and catalytic platinum, nanoparticles. Each of the cylindrical workers had a diameter fifteen times smaller than the width of a human hair.

When these simple machines were added to a milliliter drop of solution containing uranyl ions – each consisting of uranium and two oxygen atoms – the robots managed to sweep up 96 per cent of the radioactive material in an hour.

You can watch them in action below.

They swim around with the help of hydrogen peroxide, Martin Pumera, lead author of the research, published in the Journal of American Chemical Society, explained to The Register on Wednesday.

Geiger counters are so last summer. Lasers can detect radioactive material too, y'know

“Platinum is a catalyst for the decomposition of hydrogen peroxide into water and oxygen, which results in the production of bubbles to power the [robot’s] motion,” he said. Each one can move a distance of up to 60 times their own length per second.

Since they’re partly made out of iron, the nanoparticles can be collected from the solution using magnets. The build up of uranium on their surfaces was then scraped off before they were returned to the wastewater to be reused.

All the experiments are a proof-of-concept, obviously. A tiny drop of solution simulating nuclear wastewater doesn't contain the same amount of uranium found in a full-blown radiation disaster. At the moment, each robot can only collect a tiny 0.0776 nanograms of uranium. It would probably take quintillions (1018) of these tiny robots to be effective in real life, Pumera believed.

“We plan to test [the robots] on real nuclear waste in the near future, but there is still more work needed before this step. We will keep working on this kind of [robot] to improve their performance,” he concluded. ®