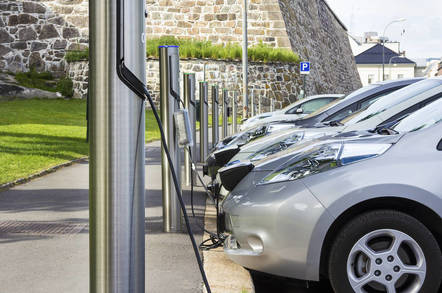 The dream of charging an electric car in just ten minutes can be achieved in the not too distant future, according to a paper published in the journal Joule on Wednesday.

“Electric vehicles will only be truly competitive when they can be charged as fast as refilling a gas tank,” the study's abstract notes. “The US Department of Energy has set a goal of developing extreme fast charging technology that can add 200 miles of driving range in [ten minutes].”

Well, the people behind the paper, based at the Pennsylvania State University in the US, reckon that goal can be attained: they've developed and described what they say is a new type of lithium-ion battery that can quickly charge itself, thanks to a self-heating mechanism.

"We demonstrated that we can charge an electrical vehicle in ten minutes for a 200 to 300 mile range," said Chao-Yang Wang, lead author of the study and a professor of chemical engineering and materials science and engineering at Penn State. "And we can do this maintaining 2,500 charging cycles, or the equivalent of half a million miles of travel.”

It's important to understand that li-ion batteries break down when rapidly charged at warm temperatures. At ambient temperatures, lithium plating occurs, reducing the capacity of the device. Therefore, the aim of the game is to quickly top up the battery without degrading the device by running it too hot nor cut its capacity by allowing lithium plating to occur.

To prevent the plating, the scientists preheat the lithium-ion battery to 60 degrees C (140 degrees F) before chilling it back down to ambient temperatures for charging. The battery pre-heats itself using a nickel foil.

The full heating-cooling cycle, simply put, inhibits that annoying lithium plating. By chilling the device to a relatively low starting temperature – the normal outside temperature – it shouldn't get too hot during the recharging process, and thus, it shouldn't degrade.

“Taking this battery to the extreme of 60 degrees Celsius," explained Wang, "it is too high and considered a danger to the materials and would shorten battery life drastically." Thus an electric car using this technology would need a cooling system to chill the warmed-up batteries before recharging them.

The boffins performed their experiments for this research using graphite cells designed for commercial hybrid electric vehicles. They managed to charge these hefty batteries to 80 per cent in ten minutes, and after the process was repeated 2,500 times – roughly equivalent to driving 500,000 miles – the batteries retained a 91.7 per cent charge capacity. The team believe it’s feasible to scale up the process to even larger batteries.

Wang hopes to achieve an even faster charge time of five minutes in the future. "We are working to charge an energy-dense electric vehicle battery in five minutes without damaging it," he told The Register. "This will require highly stable electrolytes and active materials in addition to the self-heating structure we have invented.

"Since the technology is simple but elegant, we expect that it takes two to three years of in-vehicle testing before it can be implemented and introduced in the marketplace." ®

With the right training, algorithms can predict Li-ion battery lifetime – with 95% accuracy

Want to learn about lithium-ion batteries? An AI has written a tedious book on the subject