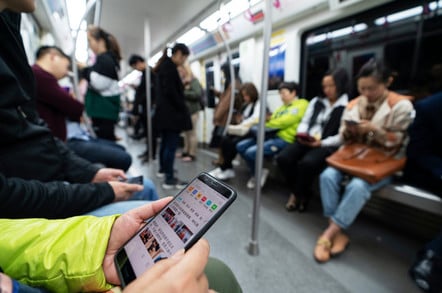 The disruptive campaign against Huawei might be in full flow in the US and to an extent Europe, but in its homeland of China, the company's smartphone business is swelling to record proportions.

Phones sales in the Middle Kingdom during Q3 dropped 3 per cent year-on-year to 97.8 million units, and four of the five biggest players all reported double-digit declines, according to shipment numbers collated by Canalys.

Only Huawei bucked this trend, growing 66 per cent to 41.5 million. This equated to a 42.4 per cent market share for Huawei, compared to the 17.9 per cent achieved by its next nearest rival.

"Its dominant position gives Huawei a lot of power to negotiate with the supply chain and to increase the wallet share within channel partners," said Nicole Peng, the analyst's veep of mobility.

"Huawei is in a strong position to consolidate its dominance further amid 5G network rollout, given its tight operator relationships in 5G network deployment, and control over key components such as local network compatible 5G chipsets compared with local peers," she added.

The US-led campaign against Huawei picked up pace this year when President Donald Trump plonked the company on the Entity List, meaning US suppliers needed a special licence to keep trading with Huawei. It was due to come into force in May but the Orange One has since given two 90-day reprieves, with the next one due to last until December.

The nationalistic rhetoric and trade shenanigans are said to have hardened the resolve of Chinese citizens to buy Chinese goods, but judging by the smartphone numbers at least, that isn't the case.

"Apple is more prepared than previous years to face strong headwinds in China," Liu added. "Its iPhone 11 models focused on camera improvements, which proved desirable to Chinese consumers. More importantly, a lower launch price of iPhone 11 and a more flexible channel margin structure for local distribution on the new devices, were critical market stimuli for Apple.

"But it faces a looming challenge, as Chinese vendors and operators are set to drive heavy marketing and promotions around 5G in the next two quarters. This could steal its thunder." ®